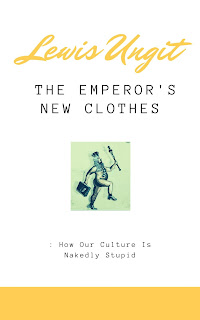 [I am writing a book and plan to post chapters as I go, here is Chapter 12. I've already posted the introduction and first four and you can start here to read them. I will update with links to the future chapters when they are done.]

Back in the old days, everyone was worried about pot. It was a weird control thing. Go watch the classic 1936 drug scare film, 'Reefer Madness' to get a flavor of what we are talking about. In that film it showed people descending into mental illness, getting in car accidents, committing violence, attempting rape, and all sorts of other ridiculous things. But now we know that pot is no big deal. It is less dangerous than alcohol and while it might not be great for you it is hardly something anyone should be too worried about. For these reasons it is a good thing that many nations and states have moved toward complete legalization of the drug. And pot is not the only thing that people were over paranoid about. Other drugs like LSD, Magic Mushrooms, and etc are probably not as bad as people once thought and actually may have some positive effects when taken in small doses.

The above paragraph sums up what is considered a reasonable position in today's western world. It was communicated to me by my pothead friends when I was in high school and is now being echoed by celebrities, politicians, and suburban mothers. Pot is not scary. It is not risky. It is not dangerous. Except.... all of that is BS. The emperor has no clothes. Pot (and other psychedelic drugs) have all sorts of known mental and physical health risks that, far from being minor, can cause major harm to individuals, families, and society as a whole.

I like Joe Rogan's podcast in many ways but one of the ways that he is an outright idiot is his promotion of pot and other drugs. He regularly talks about his own drug use (often partaking while doing the show) promoting it as good and beneficial. And in a recent episode featuring author Malcolm Gladwell the two of them ranked three cultural taboos: alcohol, tobacco and marijuana.  They agreed that society right now ranks them (starting with the most socially acceptable) as follows:

But then they argued that the order should be reworked to make marijuana the most accepted and alcohol the least accepted. Rogan went on a long rant after that explaining how he occasionally enjoys a cigarette but thinks they are so bad for society that he cannot bring himself to admit this. He says that alcohol gives him similar qualms. But... he says marijuana is so good for everyone that he thinks everyone should use it. It makes you a better person. More humble. More self aware. He also said that shrooms are good for everyone.

But this is insanity. It is an insanity that Rogan regularly expresses. Gladwell agreeing was surprising (I didn't take him for a pothead). Let me explain why normalizing and recommending pot use is a terrible terrible thing for any society to do.

The fact that so many people believe that pot use is harmless is a funny thing - it shows that the pot head propaganda worked. The medical world is ambivalent at best and often quite concerned about the effects of pot. But enough potheads had genius arguments like, "it just chills me out man," or "no one beats up his wife on pot," that the concerns of the medical world were set aside and a full on embrace of the drug is starting to take place. Our society is so dumb that we heard arguments from the potheads and arguments from doctors and said, "I am going to trust the potheads on this one."

Well.. for those of you that agree this is dumb, here are some potential side effects of pot use that medical science has revealed. The following are from the National Institute on Drug Abuse (NIDA):

1. Pot makes you dumber
From NIDA,

While I am not a fan of IQ (see chapter 13), I think any substance that causes the same group of people to lose brain function (on any test) is scary.

Pot head propagandists always say that alcohol leads to people getting rowdy, in fights, swearing, getting in trouble.... and they are right. In general, alcohol can get you in trouble on any given night if you drink too much. But alcohol leaves your system quickly. If you moderate, you are fine.

But pot can make you crazy for more than a single wild night. It has been shown to contribute to a variety of mental disorders.NIDA says that it has the effect of, "worsening symptoms in patients with schizophrenia—a severe mental disorder with symptoms such as hallucinations, paranoia, and disorganized thinking." They go onto say that, "Marijuana use has also been linked to other mental health problems, such as depression, anxiety, and suicidal thoughts among teens."

The legalized pot in my state a while back and on the first day it was legal, there was a long line of people outside the dispensary waiting to buy legal pot. I had forgotten that pot was just legalized and wondered what the long line of people were waiting for. Just observing the people I thought, "boy, that is a rough crowd." They were 30-40 year old people with disheveled clothing, uncombed hair, and t-shirts with 80s rock band logos. They looked like people that got stuck in their teenage years and never grew out of them. A crowd of greying Bevis and Buttheads.

And according to NIDA, this is not a coincidence,

"Compared to those who don't use marijuana, those who frequently use large amounts report the following:

Nice. No harmful effects there. They also note that "marijuana use is linked to a higher likelihood of dropping out of school. It's also linked to more job absences, accidents, and injuries."

Due to religious and cultural reasons, some societies prohibit alcohol but allow marijuana. Here are some regions that utilize pot as a socially acceptable drug of choice:

In contrast, the places where alcohol is socially acceptable represent countries such as:

And this brings me to my last point:

The last issue I have with pot is the absolutely unproven nature of it. We know the effects of alcohol on a society. Western Europe and the US have had widespread use of alcohol throughout our rise to global dominance. Our nations have developed science, technology, the concept of universal human rights, classical music, film, medicine, and countless other things that have changed the world for the better. Say what you want about the dangers of alcohol (I acknowledge that drunkenness can hurt individuals and families), you cannot claim that a society cannot function when it is widely used.

But we are doing an experiment... opening Pandora's box... testing whether the same can be said of a society of potheads. The data show that there are concerns with physical, mental, and emotional effects but what else is there? What other things will we learn from this society wide experiment in drug taking?

This same risk must be associated with any other recreational drugs that the Joe Rogan's of the world promote as risk free. What happens when everyone takes the same risk and the same time?

Fools rush in where angels fear to tread. People that do not understand that old is almost always better in almost all cases, are the ones making the case for pot over alcohol. They think that their own personal experiences with pot will somehow transfer to the whole of society. Read Taleb on the risks of introducing new things into our diet and health without generations of trials and observations. Just introducing something based on the testimony of pot head propagandists is insane.

Which makes sense. Insanity is one of the side effects of too much pot.

I don't want to be Mr. Reefer Madness but the film... for all its cheesiness got the basic point right. There are giant risks with unleashing cannabis on young and developing minds. And our whole society is standing around like the risks are not there. The emperor has no clothes.