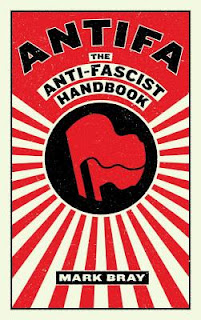 I just finished reading "Antifa: The Anti-Fascist Handbook" by Mark Bray. As I have been watching our nation fundamentally change here in 2020, I have been trying to better understand those that are changing it. I tweeted about Saul Alinsky recently as I reread his 'Rules for Radicals'. I noted how that book was disturbing and how conservatives better learn the rules, emulate the ones we can with a good conscience, and at least be prepared to fight the ones we cannot. Bray's 'Antifa' makes the Rules for Radicals seem reasonable and innocuous. While there are parts of Rules for Radicals that are smart and that can be emulated by conservatives, there is no part of this book that should be emulated by anyone that is sane.
Let me summarize the book briefly. It starts off with a short history of the fight against fascism. It talks about some of the clashes between Mussolini and leftist forces in Italy. It talks about the battles against Hitler and the Nazi's as they grew in power. His conclusion from this history is that fascism starts small often changes minds, and usually comes to power legally. And as a result, it is important for those who fear the rise of fascism to smash it early and to not trust democratic processes to prevent its rise. He makes an extended justification for the use of violence to stop fascism and an extended justification for the suppression of the speech of fascists. His argument for both of these can be boiled down to this: if we could have stopped Hitler before he built a following (by deplatforming him in various ways or by violence), the world would have been spared the death of countless Jews and a World War.
His argument for silencing speech goes something along the lines of: speech is never unlimited. Cigarette companies cannot advertise on TV, companies cannot lie about their products, and you cannot make credible threats of violence or murder. After a lot of discussion, he concludes that it is okay to silence the speech of fascists because of the potential harm that they would bring to people of color, homosexuals, and trans people. He argues that the idea that the 'market place of ideas' would allow fascists to be simply out argued is disproved by the legal rise of fascism at various points in history. Free speech then, is not helpful in combating fascists. “Rationality did not stop the Fascists or the Nazis,” he writes. The free speech of fascists can and should be silenced.
But there is one major hole in his thinking on speech. He never asks the question, "what if I am wrong?" What if the people I am refusing to let speak, using violence against, and otherwise trying to crush, are not proto-fascists who, given time, will build a nation that wants to kill people of color? How would you know that if you refuse to let them speak?
I have read Ann Coulter. She is not a fascist or a racist. Provocative? Sure. But not a fascist. I have read Milo Yiannopoulos. Again... not a fascist or a racist. Yes provocative as hell. Not not a fascist. And these are the most extreme people on the right. What about the countless thoughtful conservatives who sincerely believe that free markets, low tax rates, and small governments will help everyone regardless of race? Those guys are fascists? What about black people like Thomas Sowell and Alan Keyes who hold generally conservative views? Fascists? Fascism, according to dictionary.com is:
"a governmental system led by a dictator having complete power, forcibly suppressing opposition and criticism, regimenting all industry, commerce, etc., and emphasizing an aggressive nationalism and often racism."
The republican party in the USA has never wanted anything like this. If anything, we have fought against the centralization of power, for smaller government, and free speech. We have fought against "regimenting" of industry by the government (hands off) and while some republicans are nationalists historically, we have been as for free trade as anyone. And despite the common charge of racism, no elected republican, no major conservative commentator, no significant republican figure endorses racism. Almost all decry it loudly.
In short, the "right" in America is not fascist in any way. If anything it is much less fascist than the left in the USA. The left actually does want to centralize power. It does want to silence criticism. It does want to get more involved in industry and commerce. And historically, it has been anti free trade and immigration.
Bray and his Antifa followers are sort of like live action role players (Larpers). Pretending to see fascists everywhere when in reality there is no significant fascist movement in the USA. But Bray longs for fascists to fight and smash. I think many of the left do. And I think this is why there are so many faked "hate crimes." They are desperate for Nazi's in America. Thankfully Nazi's are almost universally hated in this country.
Which makes Bray's call for violence and silence even more dangerous. It would be one thing if he was actually fighting Nazi's but what happens if the people he is fighting are just innocent people who hate Nazi's as much as anyone? These people get labeled a Nazis, silenced, and attacked? It is the abuse, mistreatment, and violation of innocent people. Innocent people silenced. Innocent people beaten. Innocent people killed. The rights of innocent people are withheld. This is what Antifa brings. Bray and others like him are so confident that fascists are everywhere they go around attacking non-fascists and refuse to listen when we say were are not fascists. Which, ironically,  is exactly what fascists do. Fascists beat innocent people. Fascists silence innocent people and fascists refuse to listen to reason.
Mark Bray is a fascist. Antifa is the exact opposite of what it claims to be.