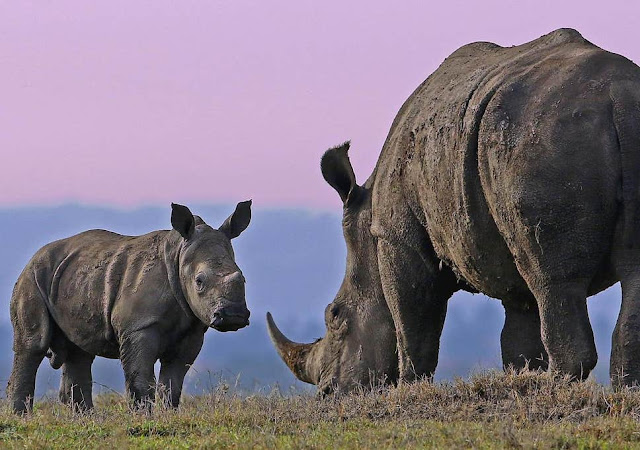 In Kurt Vonnegut's great novel, Galapagos, a group of people end up on a famed South American islands of Galapagos at the same moment that a virus is spreading throughout the world.

"How could he have known that some new creature, invisible to the naked eye, was eating up all the eggs in human ovaries, starting at the annual Book Fair in Frankfurt, Germany? Woman at the fair were experiencing a slight fever that came and went in a day or two, and sometimes blurry vision. After that, they couldn't have babies anymore. Nor would any way be discovered for stopping this disease. It would spread everywhere except to the Galapagos..."

In the novel, humanity, other than the handful of tourists stranded on Galapagos died out. They just stopped having babies. Within 100 years, no humans were left.

Fertility is the most basic element of the survival of any species. Stop having babies and you disappear very quickly from the world.

Few consider this a problem when it comes to humans. For my whole life, I have been shown charts like this: 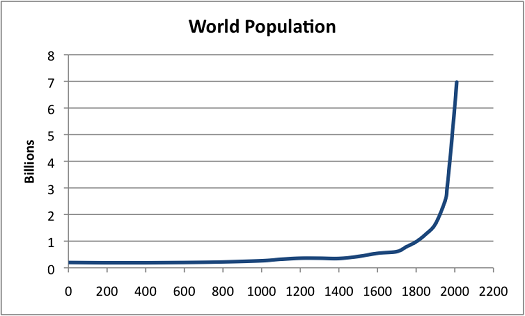 This chart leaves the reader in cold sweats. Given that asymptotic growth rate, one could imagine a situation where people are literally living on top of each other to survive. We see pictures of this sort of life in dense cities like India's Mumbai and we have been trained to imagine a world where that was true everywhere. 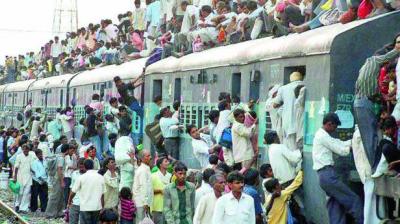 The UN, Bill Gates, and influential academics throughout the world have spent their efforts figuring out ways to drop birth rates. How can we convince humans to have less children?

But what few realize is that no convincing is needed. People are having less kids. A lot less. Consider the following: 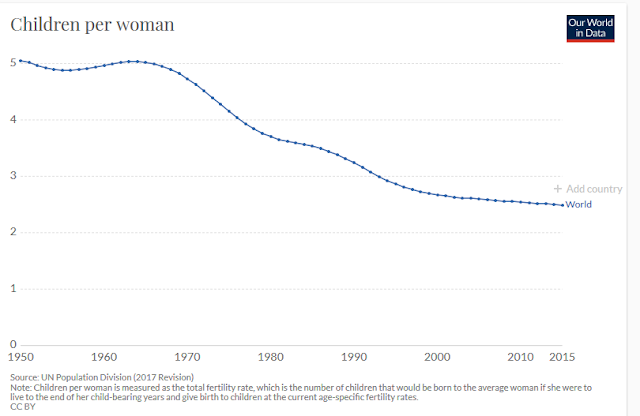 Fertility rates have dropped in half since the 1950s (which were already low historically). And those are UN numbers! The UN ... the organization pushing super hard for people to have less kids... is saying that just in a 65 year period birth rates globally halved.

Now, if birth rates of honey bees, trout, or sperm whales halved in a such a short period of time, ecologists would be panicking. What if the trend continues? What if it drops below replacement rates for some period of time? What if some sort of disease wipes out a large portion of the population and the species is unable to recover thanks to ever falling birth rates.

But with humans, not only are we not panicking, we are pushing harder to reduce birth rates further. We are allowing a billionaire software engineer from Seattle go to Africa to tell people in villages how to use condoms. And the rates continue to drop.

But... here is the thing. It is very likely that the UN numbers are underestimating the drop in fertility globally.  Darrell Bricker and John Ibbitson recently published Empty Planet: The Shock of Global Population Decline argue exactly that. They did a detailed study, country by country, of how many children per woman were being born and found that the rates are most likely much lower than commonly cited statistics like those from the UN. The fear of overpopulation is not only wrong, they argue, it is exactly backward. Consider this quotation:

“The great defining event of the twenty-first century—one of the great defining events in human history—will occur in three decades, give or take, when the global population starts to decline. Once that decline begins, it will never end. We do not face the challenge of a population bomb but of a population bust—a relentless, generation-after-generation culling of
the human herd. Nothing like this has ever happened before.”

Never happened before. What is going on with humans? Why are we not having children anymore?

China recently removed their misguided and oppressive 'one child policy' only to find out that people didn't want much more than one child anyway. Reuters reported that in 2018 (years after one child policy was rolled back) the birth rates fell to the lowest in recorded history. That should sound familiar to us here in the USA. Our fertility rates are at historic lows as well. The total fertility rate in the USA dropped to an all time low of 1.73 in 2018. That is way below the replacement rate of 2.1. And almost half of all nations are also below replacement. And again.... these are based on the widely accepted stats that are probably wrongly inflating the rate!


The reasons for the drop are debated. Some blame urbanization. Some blame the pill. Some blame secularization. Some blame feminism. Some blame the mysterious fall of male sperm counts. The real answer is probably some sort of intersection of those. But the reason is not as important as the effect. Humans are acting in a way that would disturb us if it was happening in almost any other species. And remember the quote from above, "Once [population] decline begins, it will never end."

But... you might respond, let's not get worried. There are still plenty of humans and even if we steadily decline in population, we would have centuries to figure out and solve the problem. This sort of thinking has several major problems with it. First, it assumes that the causes for the drop are not getting worse. The rate has dropped in half in the past 65 years. What if the rate drop accelerates in the next 65? What if it is quartered or worse?

Another thing to consider is that many scientists think we are overdue for some sort of global pandemic. In the middle ages, plagues are thought to have wiped out at least a third of the population of Europe. What if something similar happens again?  And... what about war? Genghis Khan is thought to have killed about 11% of the world population. And that was using spears and swords. We now have weapons that could literally wipe out the whole world. The fact that our species is here on earth is a miracle. Humans are amazing. I would argue we are the very image of God on earth. But we are very vulnerable and mortal things. Disease and war are real things that have killed large percentages of the world populatinon in the past and there is really no reason to think that something similar will not happen in the future.

But in the past, we were able to bounce back. We had 5 or 6 kids per woman on average. We repopulated when war or disease tried to wipe us out. That is why any species has children. To replace those that die. And when a species loses that power, warning lights should blink.

In Vonnegut's Galapagos humanity went (almost) extinct due to disease that attacked the fertility of the global population. I think that it is hard to argue with the statement that some sort of similar disease is already sweeping the globe. Fertility rates are dropping off. But the people who are supposed to be helping... fighting disease.... are helping to spread it.