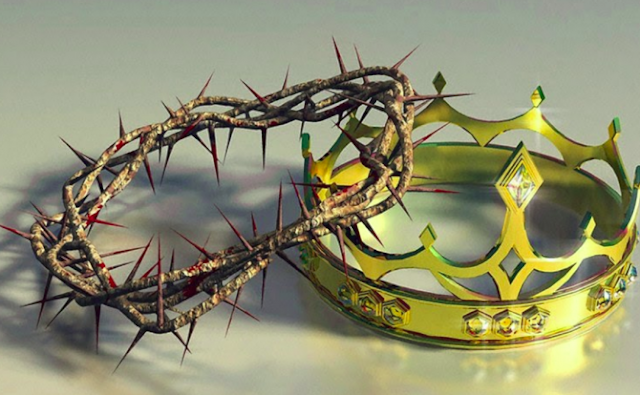 What does it mean that Jesus is King? Kanye is saying it. It was trending on twitter.

Interestingly, this phrase, 'Jesus is king' is a great summary of the whole point of the gospels. The center of his teaching does not appear to be a statement on how to get to heaven or to avoid hell (although these concepts are present). The central teaching of the four gospels is not about moral living (although, again, the concepts are present). The central message is the Kingdom of God. This is the central theme of every sermon Jesus preached. The Sermon on the Mount starts with a long discussion on who would "inherit the Kingdom of Heaven." John the Baptist in foretelling the coming of Jesus speaks of the "kingdom of God being upon you." Almost every parable Jesus tells speaks of the kingdom of God (or Heaven).


And in the days of those kings the God of heaven will set up a kingdom that shall never be destroyed, nor shall the kingdom be left to another people. It shall break in pieces all these kingdoms and bring them to an end, and it shall stand forever …

Here Daniel speaks of the kingdom of God breaking existing kingdoms (the Babylonians, the Assyrians, the Greeks, the Romans) and replacing them. There is nothing 'spiritual' (in the sense of ghostly or other-worldly) about this promise.


9 The Lord will be king over the whole earth. On that day there will be one Lord, and his name the only name. 10 The whole land, from Geba to Rimmon, south of Jerusalem, will become like the Arabah. But Jerusalem will be raised up high from the Benjamin Gate to the site of the First Gate, to the Corner Gate, and from the Tower of Hananel to the royal winepresses, and will remain in its place. 11 It will be inhabited; never again will it be destroyed. Jerusalem will be secure.

This is, again, a very this world promise. Here the prophet tells the Jews of specific regions that will be ruled over by God in this world.

I could go on. Every Psalm that speaks of God becoming king. Every prophet. Every promise of the Old Testament promises a king in this world over Jerusalem and the whole world.

Now.... can we take these prophesies literally? Maybe the prophets had it wrong? Maybe those verses were not meant literally? Well, Jesus' followers and enemies both took them literally. Let's look. In Mark 10:35ff, John and James (brothers and apostles of Jesus) start a fight among the other apostles by jostling for political positions in the new Kingdom. They obviously thought that the kingdom was a 'this-worldly' kingdom.

And as for Jesus' enemies, let us not forget the charge listed above the head of Jesus when he was executed on the cross: "The King of the Jews." No one gets executed for saying that they will be a king after they die in some sort of spirit world. They might get laughed at for that sort of thing but not executed. But claim to be king in this world, and the Caesars of the world do not take too kindly to the idea.

"If people are going to claim to follow Jesus, they have to also claim that Jesus is king of this world. "


But, someone might respond, didn't Jesus say that his kingdom was not of this world? What about John 18:36? Jesus, speaking to Pilate, says, “My kingdom is not of this world.” Is that not proof that whatever sort of king he is, it is not the sort of earthly king that we have described above? Is this not evidence that the friends and enemies of Jesus misunderstood what he was saying when he said he was Messiah? Well, yes and no.

Let’s look at John 18:36 and what it is saying and what it is not saying. First, it is not saying that Jesus is not a king on earth. The Greek says, “my kingdom is not ‘ek’ his world.” The Greek ‘ek’ can mean ‘for’ (as is often automatically assumed) but it can also mean ‘from’ - denoting origin. And I think that understanding it to mean ‘from’ is required by the context of the verse. Consider the second half of the verse where Jesus finishes what he is saying and then repeats himself but this time says, “But now my kingdom is from another place (enteuthen– ‘from hence’)." Further, if Jesus was saying that he was not really an earthly king, Pilate’s response in the next verse seems strange. He says,
"So you are a king?"

But Jesus was saying something important about his kingdom in John 18:36. By noting that his kingdom comes not from this world, he is affirming that his kingdom comes from heaven. He says that if his kingdom’s source was like other kingdoms, he would need troops to accomplish it. But his kingdom does not come from earth. It comes from heaven. God has made him king. Far from being less threatening to Pilate and the Roman Empire, this is more threatening (explaining Pilate’s shocked response). “God made me king,” is the gist of what Jesus is saying to him. But he is also speaking to the nature of the way that the kingdom comes. It does not come in the same manner. God could send twelve legions of angels to establish his kingship (Matthew 26:53) but he didn’t. God could have given him an army led by Peter but he didn’t. No. John 18:36 takes place as Jesus is going to the cross. And it is there that the battle against sin and death would be won. It is through his death that these central enemies of the Bible are defeated. Sin is forgiven by the blood of Christ. Death is overcome by his resurrection. The kingdom is inaugurated by his stripes (Isaiah 53:5). And in his death is a picture of the Christian walk. We fulfill our kingdom duties by suffering as Jesus did (Mark 10:38). So, John 18:36 is important in our understanding of the kingdom. But it does not diminish the impact that the kingdom has on the earth in the here and now. As Revelation 11:15 says, "The kingdom of the world has become the kingdom of our Lord...”

If people are going to claim to follow Jesus, they have to also claim that Jesus is king of this world. Suggesting that he is actually only king of heaven or might only become king at some point in the future is contrary to everything the bible says. No. The bible makes it clear that the gospel is that Jesus is king.  This means that the kings of this earth are simply vassals of the true king. They have a duty to do as he commands. When they fail to, they are like disobedient princes who the king will depose with time.

When William the Conqueror won the Battle of Hastings in 1066, his Norman victory over the Anglo Saxon Lords of England was secure. But it took time for this to be acknowledged. Many Anglo-Saxons denied that William was king at first. William had to go around England smashing those pockets of resistance for years after Hastings. In many places, it did not look like a Norman was king at all for quite a while.  But with time, England bowed. The customs changed. The styles changed. The language changed. Everything changed.

The cross is Hastings. Jesus secured his place as king of this world on the cross. He defeated death and sin in that moment. And the world is now his. There are still pockets of resistance. In many places it does not seem like he is king. But the Kingdom of God is upon you. Jesus has won the victory. There is no resisting him. With time, the customs will change. The styles will change. The language will change. Everything will change. We are between Hastings and the full establishment of the Conquerer but the victory has been won.

That is, if you believe it. If you are going to call yourself a Christian. A follower of the historical first century man who claimed that the long awaited King was here and that he was that king.