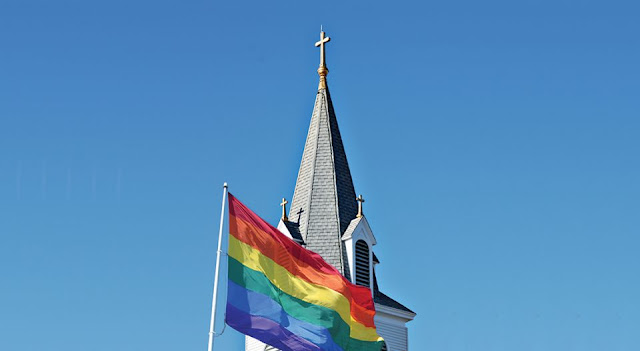 News came out this week about a guy that stole a pride flag from the door of a United Church of Christ church in Ames, Iowa and burned it. He got a ridiculous sentence (16 years) that I hope and pray is reduced to nothing. But the incident brought up an obvious question: why the hell does a church have a flag flying that promotes a sexual ethic that is in direct opposition to the biblical sexual ethic? A flag that in many ways represents oppression to those that do hold the Christian sexual ethic?

So far, the response of the broader church has been mostly to leave and then ignore woke churches. The more liberal the politics of the church, the more likely they are to be old and dying. But there is a major problem with this strategy. It fails to speak clearly to the broader world.

What does Christianity have to say about abortion?

What does Christianity have to say about sexuality?

What does Christianity have to say about marriage?

Well, those questions are very unclear if you just look at a cross-section of churches calling themselves Christian. Hell, I could show up at a church and hear a sermon about the goodness of abortion. If I am a person just considering Christianity or perhaps a new Christian and I hear that sermon, why would I doubt it? Well... it would be helpful if, as I pulled into the parking lot, there was a group of Christians out front with signs saying, "This church breaks with the historic faith by embracing abortion." If I was homosexual and wondering if my behavior was sinful, and happen to go to a PCUSA church that regularly gives sermons saying how great my sexuality is, how would I learn otherwise? Well, what if there were a group of Christians outside my church I leave kindly prepared to talk about what the bible has to say about the question.

I am not talking about the "God hates f*gs" sort of protests. No angry rants with signs depicting people burning in hell. Intelligent, thoughtful, and winsome protests. Like we have been doing for years on abortion and religious freedom. Christians have proven to be very good political activists. Our protests have impact and import nationally. We have changed politics and culture with our activism.

What I am suggesting is that at least some of this energy and skill needs to be turned inward to focus on those calling themselves Christian. Consider St. Paul's statements on this question:

Here Paul clearly argues that correcting people that "claim to be a brother" but promote sexual behavior and other morals that are inconsistent with Christianity need to be clearly placed outside the visible church. This is important because it says something. If you let, as Paul puts it, 'the wicked man', stay in the visible church it tells others that his behavior is an acceptable choice. It spreads. So... you have to expel the wicked man. You have to clearly say, "this guy is not one of us!" And it is this that we have failed to do with woke churches. We have failed to say, "this church is not one of us!" in a public and effective way. We need to.

And I think this would have a wonderful and huge impact on the broader cultural war. I think anytime the church speaks with one voice on a subject, the things she says impacts culture powerfully. Almost everything we call progress in history has been first promoted as church teaching. So... my call to the church is for more, not less of what we say in Ames Iowa. I am not saying we need to burn LGBT flags (although I think that is a minor vandalism that doesn't deserve any jail time), I am saying that we need to make it clear that if someone sees that flag on a church that it is not a real church.