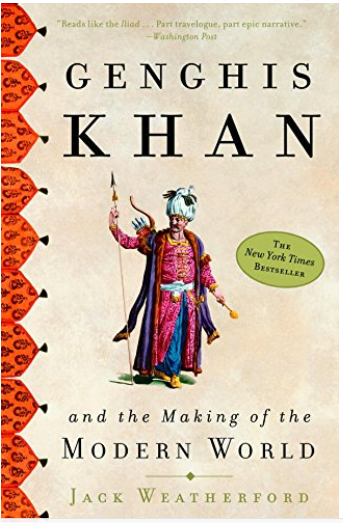 If someone wrote a book about Hitler and the Nazi's that barely mentioned the holocaust, downplayed and minimized the violence and abuse, and then generally focused on the brilliance of Hitler, we would all be horrified. We would all assume there was something terrible about the author.

Well, Genghis Khan was, if anything, worse than Hitler. Khan was responsible for over 40 million deaths and approximately 11% of the world's population! If a city refused to surrender to him, he would bring residents outside the city in groups of 100 and slaughter them systematically. He also had a rape production line where his men would search for beautiful virgins, perfume them and dress them up, then take them into Genghis where he would have his way with them one after another. Hardcore History host Dan Carlin read first hand accounts of people approaching areas where the Khans had recently conquered and the smell of corpses being overwhelming for miles away. Those they did not murder, they enslaved. Populations dropped by the millions in all corners of Asia.

But the reader of Jack Weatherford's Genghis Khan and the Making of the Making of the Modern World would never know that. No mention of mass rapes. No mention of populations dropping by 25-30%. The death tolls are either not mentioned, questioned, or minimized. Instead, the focus of this terrible book is on what a great and tolerant guy old Genghis was. Genghis allowed religious diversity, was a good administrator, and even a piously religious guy. In other news, Hitler was an artist, a vegetarian and a dog lover.

To get a taste for his Mongol-Holocaust-Denying bent, consider this passage,

Although the army of Genghis Khan killed at an unprecedented rate and used death almost as a matter of policy and certainly as a calculated means of creating terror, they deviated from standard pracices of the time in an important and surprising way. The Mongols did not torture, mutilate, or maim."

Never mind that this is nonsense (the Khans absolutely tortured mutilated and maimed) think about a sentence that starts with, "Although they killed at an unprecedented rate..." and then tries to pivot to something nice. My fear is that some people might not notice the slight of hand and might get fooled into thinking Genghis Khan was anything less than a monster.

No. Don't read this book. It is garbage. Read John Man's, Genghis Khan: Life, Death, and Resurrection. Or even better listen to Dan Carlin's Hardcore history series on the Khans. Carlin's history was the most enjoyable telling of the amazing story of the Khans. You will not regret the listen.

I love reading about Genghis Khan. The man was amazing. Ruled a greater percentage of the world's population than anyone in history. Ruled more land than anyone in history. Never lost a battle. Used innovative and genius battle techniques. He was a killing machine.But downplaying his violence and making him into some sort of an Enlightenment precursor is a joke. It makes for a ridiculous read. And it, strangely, makes Genghis Khan a lot less interesting.