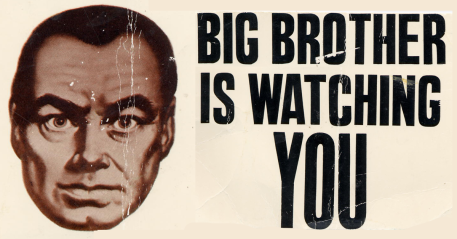 Okay... I am well aware that saying, 'its like 1984' is a cliche that everyone is doing. Call me boomer if you want. But I think the reason it has become is because the book is looking more and more prophetic with every passing day. So... here are some things that have happened since Orwell wrote his great novel back in 1949 that make it so prophetic.

In the novel, the memory hole was a place that you needed to put news items and popular culture that had been determined to be no longer politically correct. Let's say you had a newspaper article about a man that the government wanted to delete from the historical record. Everyone was expected to take their newspapers and drop them into the memory hole. All history would be modified and republished by the government with the proper edits.

The digitization of information has made this dystopian idea a reality. Let's say you have a movie starring an unpopular politician, you can just edit him out on future copies. Let's say that you have a book (including the bible) that contains uppopular or un-PC ideas? How do you fix that? Well, with paper books it was damn near impossible. But now, with everyone reading Kindle books, it is as easy as having Amazon make the edits and waalaa, it is done. Movies, Twitter, Facebook, books, articles, and TV are all subject to change. Many get their information from Wikipedia and Wikipedia is already doing this. Take Caitlyn Jenner's wikipedia (or any trans person) page. Pull it up and you will need to read quite a bit to realize that Jenner was an Olympic hero as a man! Deadnaming (saying Jenner's pre-transition name) is considered a thought crime by Facebook/Twitter/Wikipedia and the rest.

So... we all remember that Caitlyn was once Bruce.... but the records of this are quickly being put down the memory hole.

And this is now true with media as well. Revenge of the Nerds is a movie that was insanely popular when I was a kid and got sequels and the actors in it went on to fame in other things. But because of a several scenes that are not acceptable #MeToo era, good luck finding it.

And there are others that are disappearing (good luck finding a copy of Disney's Song of the South). With all things digital, removing something from history that is no longer compatible with the values of those who control the record, is easy to do.


2. Words that mean the opposite of what they should mean

3. Constant spying on all citizens
In 1984, somehow Big Brother was able to perfectly monitor all citizens. This seemed far fetched when it was written. How could a government listen to everything you say, watch you constantly, and know everywhere you go? Well.... now governments can and do. Edward Snowden exposed the fact that our government is now attempting to monitor everything everyone does and store it forever. Everyone. Everything. Forever. And because we are all constantly on devices - phones, computers, smart cars, etc this data is available. What were you thinking about two years ago on Tuesday? Google knows (you were checking football scores) and the government does too. Where did you on the third Sunday of June? Your cell phone movements are on record and the government can see everywhere you go whenever they want. And we all carry these cell phones that have cameras and microphones on them that can easily be hacked. Snowden in his excellent autobiography, Permanent Record, talks about a moment for him when he was working for the government and just watching people through their computer cameras.

We used to think the idea of the government wiretapping us was ridiculous. Now, we are all wiretapped. Every single one of us. And the government is working to make all data collected, permanent.

Orwell's Big Brother watched everything everyone did. This is a reality now.

In 1984, it did not matter how connected you were. How high you were in society. You could be a rich party member.... sooner or later, you were going to be taken down. You would disappear. You would be removed from society and deleted from history. It was a matter of when not if you would eventually be found to be in conflict with Big Brother and require reeducation.

In the same way, we live in a society where you get people like, JK Rowling who was, just a couple years ago, considered the most woke possible person. She was a poster girl of the politically correct left. But then standards changed. She made some sort of crazy statement along the lines of 'people shouldn't be fired for acknowledging that biological sex is a real thing.' This milquetoast statement prefaced with the obligatory statement that people can identify and have sex however they like, was enough for her to get 'cancelled' by a large portion of society for being 'anti-trans.'

And this is the crazy thing about the world we live in. Kafka-esque rule changes make it so that something that was widely praised and socially acceptable a few years ago is now considered unforgivable. To offer another example, take Democratic Senator Al Franken. The man was the model of the left - a rare combo of being both woke and funny. But he was cancelled by allegations he got too handsy in a couple of impromtu photos. Mostly people get cancelled for having the wrong ideas. Bill Gates, Gwen Stefani, Erykah Badu, Kanye West, and countless others said or did things that showed they were not woke enough and got canceled. Shockingly, Barack Obama almost got cancelled for saying that we should not cancel people.

Now, you might say that I am being hyperbolic here. Cancellation in popular culture is not the same thing as what we see in 1984 (where the victims are tortured and reeducated) but I think that we can only minimize cancellation when it happens to celebrities. What about teenagers that get caught on video saying racist stuff? They get kicked out of school, shamed by friends and family, and lose most job prospects - the internet is forever and those videos will be kicking around every time an employer googles their name.

But... you respond... all these people did truly bad stuff. Lewis, you say, stop defending racists at Alabama! My response is to remind you to at how quickly woke culture changes morals. 20 years ago, it was perfectly acceptable (and actually mainstream) for democrats to oppose same sex marriage. Clinton signed a federal act banning gay marriage! Barack Obama ran with the stated position of being against gay marriage. In the 1980s, most people thought homosexual sex should be illegal! This is how fast things change.

And you don't think it will happen to some of your views? Or do you think you will be able to update your views to match the PC zeitgest with perfect timing? What if an old video of you appears? Remember they have video of you. They have everything you ever typed on the internet. Everywhere you went. Everyone you ever donated to. When morals change this quick, you are sure to be on the wrong side of the next cancellation wave. And if not you, someone you love. And that person, will get cancelled. A story will be written about them on how hateful they are and then good luck.

And this is just social shaming. Many want to get the government in on the game. A florist who didn't want to service a gay marriage was sued almost out of business. She held a view Obama held when he got elected and they wanted her to lose her business. A baker who held the views of Bill Clinton was almost sued out of business for the same thing. The government absolutely can help cancel people. And 2020 might be the year it begins.

I am not crazy. I know we are not yet in 1984. That level of oppression is not here yet. But the remarkable ways in which the state now has some of the very same capacities that Orwell dreamed up in the great novel is frightening and amazing. China is already using these abilities. The US might not be far away. 2020 might be like 1984.