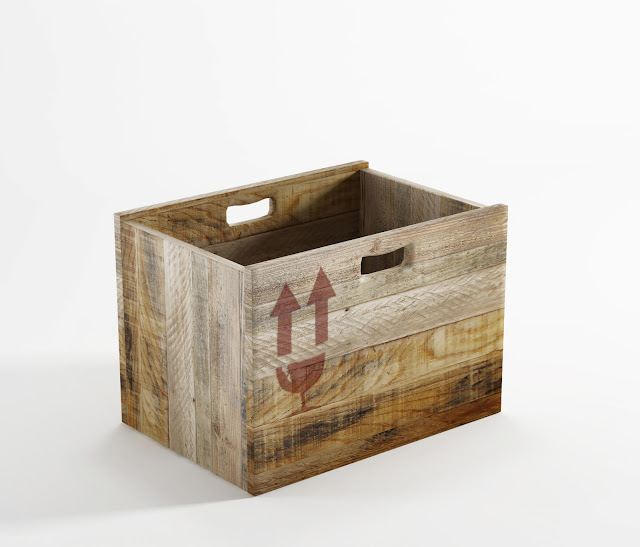 But I did not have a stroke. I am not babbling. We cannot predict the future but we can recognize fragility. And the global economy in general (and the US economy specifically) is very fragile right now.

Fragility is simply being in a state where you do not like shakes or disruptions. You want things smooth when you are fragile. Stable and calm. The problem is that the world is not stable and calm. There are wars. There are crazy politicians. There are irrational panics in the stock market. There are bubbles. And our nation is very fragile.Why are we so fragile? Debt. Not just national debt but personal debt. We all owe ourselves a ton of money.

And despite the fact that Paul Krugman doesn't think this is a problem, it is. 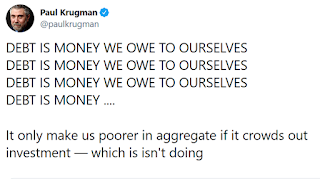 If you think about what debt is, it is the spending of resources now, with the promise of giving those back later. Putting aside the fact that Krugman misses that that the collective is a concept and that actual debt is owed by actual people to other actual people (even if they are both in the US), that can still be a problem. Let's suppose I am an astronaut on a space mission with a daily food and water ration. If he is really hungry, he could borrow an extra cup of water and bread roll from himself and as long as he eventually skips a cup of water and bread roll in the future, he will be fine. No harm done. But if you imagine him doing that every meal - borrowing some food/drink item from his future self - you can see how at some point in the future, this will get painful. At some point, he better be prepared to fast. And if he got too far ahead, it could kill him. Doesn't matter how much water you drink for 30 days, if you then go a week or so without it, you die. Starvation is a bit different calculus but eventually the same applies. That is because your body does not perfectly store the energy and hydration it gets from food and water. It burns them as it gets them. Similarly, unless you are buying nothing but non-perishable things, your future self will eventually need to do more to pay for them. Either your future self or your kids and grandkids. But someone will have to pay. What happens if you don't? Well, someone gets screwed. Defaulting on debt does two things: impoverishes the person you borrowed from and ruins your credit (you cannot borrow anymore). The fact that we owe money in our own currency (and can always borrow more) does not fix the issue. If we inflate the dollar to pay for everything that degrades the wealth we have just via another means (increasing the tax rate along the way).

And everyone knows how debt can get out of control. For all debt, we have to not only pay back what we owe but some interest rate. Interest rates are magic in that they compound and grow. This is how people who invest wisely get rich and it is also how people who get too far in debt go bankrupt. You borrow $10,000 on your credit card at 18% interest. That means that every year you have to pay $1,800 just to cover the interest. But that is a lot of money so you can borrow more to cover that interest. So you borrow another $1,800 the next year. That means that your interest the next year will be 18% of $11,800 or $2,124. And so on. In 10 years, that $10,000 becomes more than $50,000 with an annual interest of $9,420!

And this is a fragile place to be. If you owe so much money, it becomes hard to borrow and all that has to happen is to lose some income and you cannot even pay for the interest payments. Then bankruptcy and financial ruin.

And the United States (and most industrialized nations) do have a huge debt problem. Both personal and public. The per capita personal debt is $50,000! Given that the per capita income is only $31,000, that means that we all owe quite a bit more than we make every year.  This is a ridiculous amount of debt. But it is nothing compared to the public debt. As I have written in the past, we are now $22 trillion in debt to foreign countries but this does not include all that we owe to entitlements (to ourselves). Social Security and Medicare alone are projected to bring a mind blowing $82 trillion in deficit over the next 30 years.This means that each of us owes, in addition to our private debt, approximately $250,000 in public debt! Combined we are all $300,000 in debt with income of only $31,000! We all owe 10x what we make! This is a crushing amount of debt. And it is growing not shrinking. Every year our deficits increase and do not decrease. 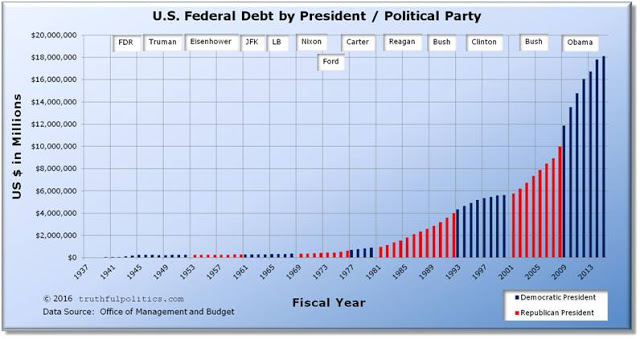 This means that we are deeply in debt and getting deeper.

What happens when you are progressively getting deeper and deeper in debt? The answer is that you get fragile. You start depending on the next raise. You start fearing losing your job. You start being desperate to keep the income you have and building upon it. Because if your income decreases, it is a catastrophe. The second you cannot cover your debt, the snowball starts. Within a few years, the compounding gets out of control. One thing going wrong and there is a crash.

As I was writing this, I saw this headline, "Federal deficit hits $134 billion in one month." In that article, Federal Reserve Chair Jerome Powell warned that the federal budget is on “an unsustainable path” due to rising levels of federal debt. He went on to say that the “high and rising federal debt,” could make it difficult for the economy to recover from future market downturns. This is fragility. A little bump and big problems.

And this really what happened in 2008. That 'great recession' was the result of the mortgage industry needing property values to increase every year to prevent a giant crash. The second property values dropped (precipitously) countless mortgages went to zero dollars in value. Companies that thought they were sitting on billions were in fact sitting on piles of worthless paper.

The mortgage industry was fragile (and in many ways still is). But we live in an economy that is still massively fragile in so many ways. So many areas of our lives are built on debt and require continued growth to continue to exist. All it takes is a recession, a stock bubble popping, or serious war and an unexpected contraction will take place. People will start pulling their money from their investments (stocks, bonds, and real estate) only to find that they have dropped to worthless paper. Billions in wealth will disappear.

And this is why I predict that 2008 (or worse) is coming soon. Not because I am a prophet. Not because I can see the future. But because I see fragility in the system. Fragile things break when shaken.