Animal Rights or Human Rights? You cannot have both. 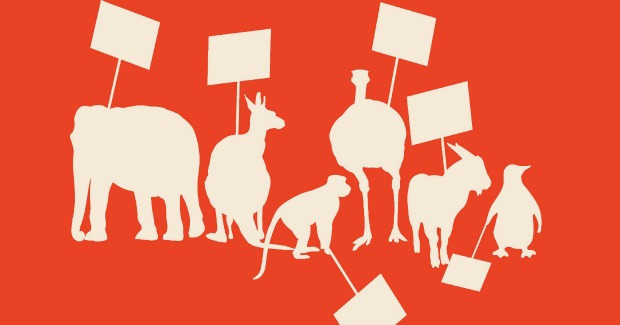 The idea of human rights was slow to come on the scene. The earliest whispers of it, according to historian Tom Holland, were in the formulation of canon law at the turn of the first millennium. And obviously, the concept has developed quite a bit since then. But today, almost everyone agrees that all humans have certain rights (although we might debate what those are) that apply to everyone simply by nature of the fact that we are human. We have the right to freedom of religion, freedom of speech, freedom of assembly, etc - not because we are rich, powerful, or educated but simply because we are human. To exercise a right, we don't need to figure out what sort of human you are.... just that fact that you are human is enough.

But some would argue that as our morals evolve (something that is actually impossible) we now are extending rights to animals as well. It sounds very nice on the surface. Animals are cute and protecting them is something that almost everyone thinks of as a nice thing. Who wants to see a beautiful lion poached? Who wants to see a majestic elephant butchered and left to rot for her ivory? No one.

This natural instinct gave birth to the animal rights movement. Animals, the argument goes, deserve certain rights as well. While few want to define these rights with rigor, generally speaking the idea is that any sort of cruelty to animals violates their right and deserves some sort of punishment.

An example of this sort of thinking was when All-Pro NFL Quarterback Michael Vick was convicted of abusing dogs in a dog fighting ring. The outrage was universal, swift, and merciless. Vick was a monster - everyone agreed - and deserved major punishment. And he got major punishment - almost two years in prison, a resulting bankruptcy, and losing multiple seasons of his pro-career in the middle of his prime. Many didn't think it was enough.

But comedian Brian Regan made a crack about our hypocrisy on this issue. When he was asked about it while the outrage was still fresh, he said something along these lines (I couldn't find the exact quote), 'Yeah, my friends and I were at a pig roast the other day, and we took a stick and we jammed it through the body of the pig, hung it over a fire, watched the fat drip out of its body, then when it was done, we put in on the table, and just for the fun of it, put an apple in its mouth. And as I was pulling the flesh off its bones with my teeth, I said to my friends, 'Isn't what that Vick guy did to those dogs despicable?'' Regan was pointing out the obvious hypocrisy of much of the animal rights movement. We tend to be very biased in favor of cute animals and less biased towards less cute animals.

Michael Vick didn't kill more dogs than the number of mice your average farmer kills with mouse traps. Yet, we do not send farmers to jail. No. Vick killed dogs. And dogs are cute, smart, and our friends. So we all hated Vick for a while.

With animal rights, it is based on things. With human rights it is simply based on our species.

And this is the danger with expanding rights to animals. It is impossible to give full rights to every living thing. You cannot walk down the street without accidentally murdering an ant or crushing a beetle. You cannot breathe without killing microscopic animals. We cannot just allow mosquitoes to drink our blood without swatting them. No. That all gets ridiculous. To extend rights to animals, we have to include qualities. Based on intelligence, based on utility, based on population/endangered status, based on cuteness, and based on whether or not they make good pets.

But, if human and animal rights are on a continuum, this new qualification has potentially devastating consequences. What do you do with a very smart dolphin and a very mentally disabled human? The human is not as intelligent as the dolphin.... shouldn't the dolphin get as much or more rights? What do you do with someone that is disfigured and ugly when compared to a beautiful horse? What if an animal is more loved than the town outcast (an ex-con or a neo-nazi)? Simply by being consistent in our logic, we learn that if animal and human rights are on a continuum, then human rights cease to be absolute. They start to be dependent on the same sorts of qualifications that animal rights are qualified on.  And this is exactly what some animal rights advocates are promoting.

Some such as Princeton Ethicist Peter Singer, suggest that human and animal rights are on a continuum,

"Characteristics like rationality, autonomy and self-consciousness...make a difference. Infants lack these characteristics. Killing them, therefore, cannot be equated with killing normal human beings."

Elsewhere, Singer writes,  "The calf, the pig, and the much-derided chicken come out well ahead of the fetus at any stage of pregnancy, while if we make the comparison with a fetus of less than three months, a fish would show more signs of consciousness."

Follow the logic of the two quotes. Did you catch that? Some humans (babies) lack traits that make that equivalent to other humans (adults). Monstrous to most people. But perfectly consistent once you take any sort of logical approach to animal rights. And if we can kill a calf, why could we not kill an infant? And lest you think that the risk be limited to babies (as though that is not monstrous enough), it is this sort of justification that has always preceded all sorts of human rights abuses. The slavery of ancient Rome was based on Aristotle's conviction that some humans are not smart or capable enough to be free. The genocide of the Armenians by the Turks was based on the idea that they were not fully human. The horrors that the Nazi's unleashed on the mentally infirm was based on this sort of thinking.

Human rights (that we deserve rights simply by being human) and Animal rights are in DIRECT CONFLICT. The two simply do not go together.

So, am I advocating the butchering of animals? Am I justifying Michael Vick's dog fighting or the slaughter of elephants for ivory?

No. There is another way. The Christian view of the treatment of animals is one of human stewardship. We are called to treat animals with kindness not because the animals have rights but because we have responsibilities as the representatives of God on earth. We treat animals in a way that reflects the goodness and glory of God. This view of protection of animals, far from undermining human rights, relies on the special status of humans in the world to be adhered to. Lions, elephants, apes, and dolphins are not called to care for other animals. Only humans. Not because we are equal to them but because we are different. Special. God's image.

If you love human rights, reject the modern view of animal rights. Instead, embrace the historic Christian view of humanity. Only this approach will protect humans and animals alike.