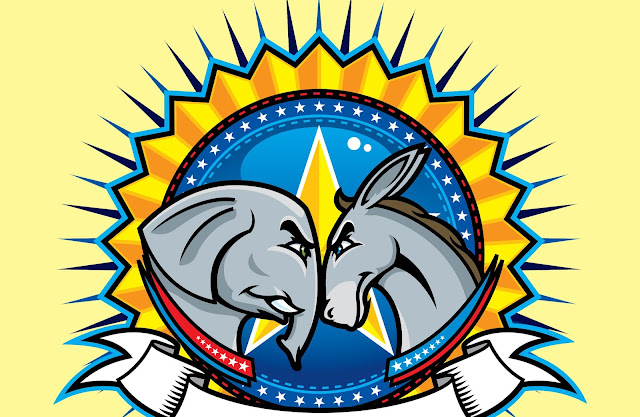 Donald Trump Jr. was on the View the other day and Meagan McCain confronted him about the lack of civility his father has shown. There was a part of me that appreciated what she was saying. It would be nice if everyone acted with honor and if political debates were pleasant things where friends took turns gently trying to change each other minds.

But then I thought about it.

The first thing that came to my mind is that this sort of debate only makes sense when the issues that divide the two sides are small. You debate small things (sports, favorite movies, etc) with a smile on your face and without breaking up friendships. But what about life and death issues? If you were on a plane and a crazed terrorist was trying to storm the cockpit, you would not cheerfully seek to convince him that this was not the best course of action. You would tackle him.

The more something matters, the less civility matters.

But what about Christianity? Shouldn't good Christians have a certain sense of cheerful civility to our manner?

John 2:15 15 So [Jesus] made a whip out of cords, and drove all from the temple courts, both sheep and cattle; he scattered the coins of the money changers and overturned their tables.


No. Jesus rarely responded dispassionately when the poor were being abused, God was being rejected, or hypocrisy was being exercised. Instead he appears to respond with the same sort of anger that a father might have if a man was trying to abuse his child. The right sort of anger. Christians should not be focused on civility. Our job is to focus on love for God and love for our fellow man. When someone opposes God and man, we should not cheerfully accept it.

And we live in a moment when no small issues are at stake. Abortion is a horror. 50 million dead. Babies being butchered every day. Socialism is a horror. Poverty for a whole nation. Starvation. Religious oppression is a horror. Churches taxed out of existence. Pastors put in jail.

We stand at a moment in history when the issues are not really just issues..... they are monumental moral and ethic questions that will shape our nation. Anyone that can cheerfully discuss the butchering of babies or the imprisonment of pastors doesn't really care about babies or freedom.

But doesn't a rejection of civility just lead to people yelling (or worse, committing violence) at each other? This is good question and a worthwhile concern. There is a certain value to avoiding escalation. Civility is a way to prevent this escalation. But civility is not an end in itself. When one side abandons it, the other side should not stick to it as though civility was the goal. If the issues are big enough, civility is at best a tool. But sometimes tables need to be overturned.

Sometimes you need to be angry. If you are in a match with a fighter, you need to figure out how to fight or you lose. Did you ever wonder why Samson is considered a good guy in the bible? He is listed in Hebrews 11 as a man of faith. But his life was one of women and violence. He appears to have had a short temper and been a womanizer. So why is he our example?

Well, God told the Israelites to drive out the Canaanites from the Promised Land. And instead, Israel lived with them. They were civil. Only Samson obeyed. He fought the evil people. The Canaanites practiced adultery and sacrificed children in the fire. Samson had plenty of problems but he was a one man army. He lost his eyes in the battle. But he did not stop fighting.


I don't know if Trump's approach is the best approach or not. But he is at least fighting. At least he is not putting civility above the promotion of what he views as good. He understands (as democrats do) that this is war. As Andrew Brietbart said, “Walk toward the fire. Don’t worry about what they call you. All those things are said against you because they want to stop you in your tracks. But if you keep going, you’re sending a message to people who are rooting for you, who are agreeing with you. The message is that they can do it, too.”