Women Are Better At Arguing 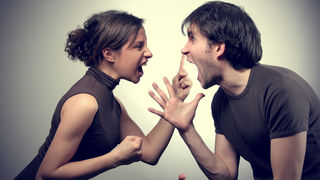 Today, I would like to note the fact that women are better at arguing.

One thing I council young men getting ready for marriage on is the ability to apologize quickly. Why? Because as every experienced husband knows, continuing a fight, especially when you have any fault at all (and sometimes when you have none) is a losing proposition. Wives have this amazing ability to not only win an argument but to leave a man bruised and battered as a result. I have never met a man that regularly wins arguments. And even when men win, they often find themselves regretting the argument anyway. She will cry. She will bring it up later. She will find ways to pay him back. And, if he is smart, he learns to avoid arguments like the plague.

It is simply a fact that women are better at family arguments than men are. It is like me playing Lebron James in basketball. I might get lucky and hit a shot on very rare occasions but the score at the end of the day will be very one-sided. So, what do we do with this one sided nature of male/female relationships? Well, it is sort of funny but the bible sort of asks for mercy: "Women, submit to your husbands." Please. But the reason for this command is very serious. If a woman is unsubmissive and unwilling to defer to the man, the marriage will not work in the long term. She will get her way every time.

The bible doesn't tell women to submit but not men because it is biased against women. It says that because without some sort of restraint, women would run the household.... until it failed.