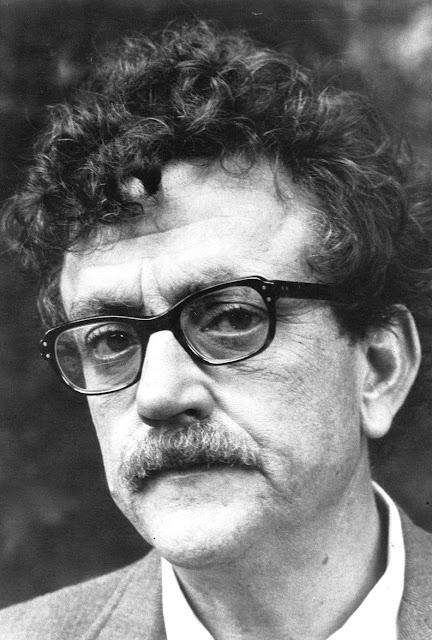 Kurt Vonnegut was an interesting man. He fought in World War II. Fought in the Battle of the Bulge. He won the purple heart. And he was at Dresden when the US firebombed it toward the end of the war. And it is Dresden that is the emotional heart of Slaughterhouse Five. Vonnegut went on to become one of the most famous and innovative writers of the 20th century. His dark humor, interesting observations, and unique prose set him apart from all others.

I discovered Vonnegut when I was in high school and wanting to be a writer. I read every book he ever wrote and then tried to copy his style exactly. I think I did a pretty good job of it for a teenager. I once impressed a teacher so much that he had me read one of my short stories in front of the class. But after high school I quit writing for a while and, having read almost everything Vonnegut ever wrote, I quit Vonnegut as well. I didn't think much of him.... until he died a decade ago. So it goes.

His death reminded me of him and how much I loved him in my youth and what an impact he had on me. I decided to read him again. So, over the past 10 years, I have reread most of his canon. I have enjoyed them but in a different way. I am older now and have very different perspective on life than I did at age 17. At 17, I was a functional nihilist. Vonnegut was an atheist. Not an angry atheist just a convinced and maybe a little sad atheist. Vonnegut called himself a "Christ-worshipping agnostic" at times and at other times a "Christ-loving atheist." So, he was not hostile to faith but also was not faithful in any way. His books have the feel of a man who realizes the nihilism that is undeniably linked to atheism but hates that nihilism and desperately clings to meaning and purpose in spite of it. Much of the humor of his writing is in narrators who cling to meaning in a meaningless world.

When I was in high school, this was incredibly attractive and romantic to me. I read so much Vonnegut that I thought like his narrators. I don't think that was healthy. As a matter of fact, as I have reread Vonnegut I am realizing what a bad influence he was on me in my youth. Many of the worst things I did as a teen and young adult I did from a Vonnegut-ian sense of romantic atheism. His books have violence and obscenities (more that I had remembered) but it is his sad and dark view of the world that I think had the worst effect on me.

But this does not mean that I don't think he isn't worth reading. Vonnegut has some good and important things to say about the world. As a man who clearly wanted the world to matter, he seems to have found certain ideals to cling to and dedicates his books to showing the importance of those ideals. As a man who saw so much death in the Second World War, one of those ideals was the need to decry the horror of violence and war.

And on this subject alone, Slaughterhouse Five is worth the read. Vonnegut is the narrator (a rare case where he narrates his own novel rather than the protagonist). The story's subject is the life of Billy Pilgrim, a man who, like Vonnegut, fought in WWII and was at Dresden. But Billy Pilgrim, unlike Vonnegut has a unique condition. He is "unstuck in time." He bounces throughout his life experiencing over and over various moments in his life. Backward and forward he goes and relives the future and the past. This condition, he claims, is caused by his alien abduction. He was kidnapped by aliens from the planet Tralfamadore and kept in a zoo. These aliens were unstuck in time too. They saw life the way we see a mountain range.

But this book is not science fiction. In a modified form of the unreliable narrator, the reader is unsure if Pilgrim was truly abducted or if he is simply crazy. His family thinks he is crazy. Doctors think he is crazy.  He had many traumatic life experiences (both as a child and in the war). And his experiences in space sound a lot like the books of his (fictional) favorite science fiction author, Kilgore Trout.

And Vonnegut's use of the alien story is more of a tool to evaluate the world that we live in than it is a tool to evaluate aliens or the possibility of space. Pilgrim is given an outsider's perspective on life and all the things that took place in his life, he can now observe from a distant and more philosophical perspective. And this philosophy is both a philosophy of love and of fatalism. It is a perspective that observes in horrific detail the terrors of this world but with a slightly comical but dark detachment.

But, honestly, while Vonnegut's plots are usually interesting, ironic, and often darkly fun, it is not his plots that make his writing. It is his prose. No one can write like Vonnegut. Sad and funny at the same time. This little scrap from his introduction gives a taste of the style,

“There are almost no characters in this story, and almost no dramatic confrontations, because most of the people in it are so sick and so much the listless playthings of enormous forces. One of the main effects of war, after all, is that people are discouraged from being characters.”

When Pilgrim's daughter becomes convinced that he is crazy and starts condescending to him, Vonnegut writes,

“It was very exciting for her, taking his dignity away in the name of love.”

When talking about the biblical story of the destruction of Sodom, Vonnegut talks about Lot's wife,

“But she did look back, and I love her for that, because it was so human. So she was turned to a pillar of salt. So it goes. People aren't supposed to look back. I'm certainly not going to do it anymore.”

This book is powerful and sad. I don't think it is Vonnegut's best book (I would give that honor to Mother Night or Dead Eye Dick) but I do think it is the book that gives the most insight into the author and is therefore a great place to start reading him.

Vonnegut was once asked to speak at famed atheist Isaac Asimov's memorial service, when he spoke he said, ''Isaac is up in Heaven now.'' It was meant to be a joke. Apparently it got the crowd of Humanists and skeptics to laugh pretty hard. But now Vonnegut is dead. So it goes. What he prayed in his final moments we will never know (perhaps he is in heaven and it is no joke). But his writings, like some Tralfamadorian vision live on. The Tralfamadorians said that instead of focusing on the bad parts of life, we should constantly live in the good moments. I think there is something to this. Perhaps instead of focusing on the aspects of Vonnegut that are not helpful, we should focus on what he did that was true and beautiful. And there is a lot there if we do.