Book Recommendation: The Forge of Christendom by Tom Holland 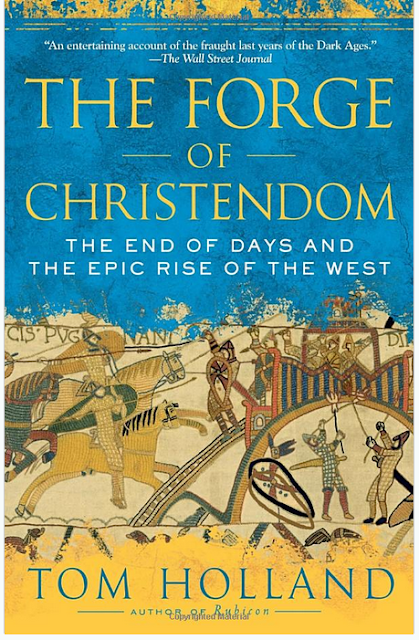 Reading history is a necessary thing. So many people are so ignorant of the world just a few decades ago. So many people get all their knowledge of history from videos watched in high school. History is critical to read because it gives us perspective. Knowing how people thought and lived centuries ago helps shed light on our own idiosyncratic culture. Every culture has faults but every culture ignorantly assumes that they have none - or at least assumes they know their faults. But the reality is that our culture is the air we breath. We cannot see it. We cannot observe it objectively.

The things we believe seem self evidence. Things like the separation of church and state seem obvious. Things like slavery seem obviously wrong. Things like wars for land seem obviously wrong. But only those that read history see how the opposite of these things were once assumed. It seemed obvious to most in the year 900 AD that church and state were to be intertwined. Kings picked bishops. Bishops bowed before kings. Slavery seemed obviously fine to the Islamic forces that swept through Northern Africa and into Europe in the late years of the first millennia. Wars for land seemed a part of life for all of these people during this era.

But it was during this era that suddenly some of these things started to change. The Pope started to establish himself as something no longer subservient to any king but as a power of his own. Christian Europe fought back against the slave trade of the Muslims. And while wars for land continued, church oversight over this - a moral voice on what counted as just war - started to be established.

How did this amazing transition take place? Tom Holland's 'The Forge of Christendom: The End of Days and the Epic Rise of the West,' attempts to answer this. Holland tells the story of church and state around the turn of the millennia in Europe. And what a wonderful book it is. Holland fills the pages with delightful stories, terrifying accounts, and fascinating facts. He writes not with the wooden detachment of an academic but with the delight of a man who loves the subject that he is discussing. The era comes to life with his writing and as you work your way through the pages you start to understand the thinking and mindset of the people of this era. And you also come to understand the change - an earth shaking change - came to be.

One of the things that I love most about Holland is his tendency to take the primary sources at face value (with a certain degree of tongue in cheek) no mater how fantastical they are.

Here is an excellent example,

"In 954, Louis IV, Gerbaerga's husband had clattered out through the gates of Laon, down the hill on which the royal capital stood hunched, and galloped off into the wilds that stretched byond. There, deep in the woods, he had caught sight of a wolf and set off in hot pursuit - but alas, the creature had proved to be a demon, and the king, thrown from his horse, had suffered crippling injuries,. Stretched to a sickbed, he had soon succumbed to a loathsome disease, which had set his body to rot.... death followed shortly after."

There are no modern qualifications given (i.e. 'now we know wolves don't become demons....') but a simple recounting of what the sources say. This makes the story more fun and readable and takes you into the world of this era.

I cannot recommend this book more. Go buy it and read it and then give it to someone.