About that Pew Study: Christianity is Not Shrinking 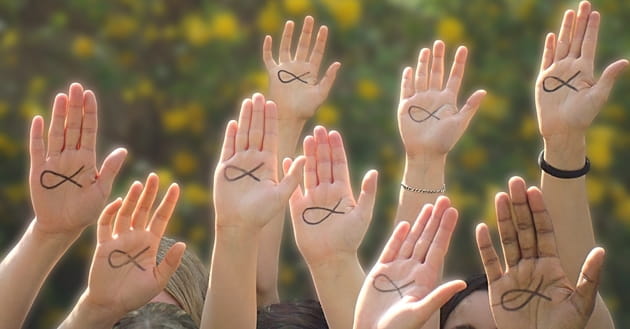 "In U.S., Decline of Christianity Continues at Rapid Pace," says the shocking new study from Pew. Well, if true, I have been very wrong. In the past, I argued against this idea. But my previous articles did not discuss this particular study or the measures they use to come to that conclusion so I figured I would engage the Pew Study and show why I am still convinced that Christianity is not really shrinking. Let's review the Pew Study first. Consider this: 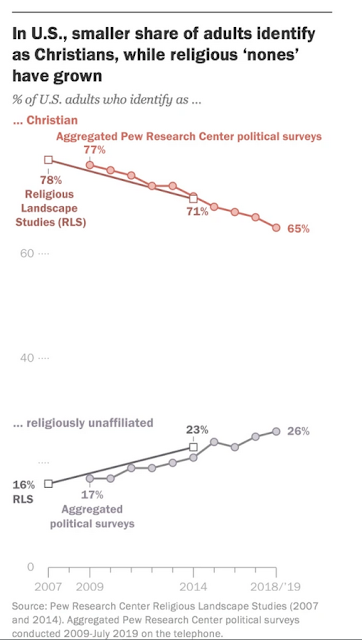 That looks pretty bleak....and based on these data, you would not be blamed for agreeing with the headline. Christianity is in rapid decline in America.

But there is something that doesn't fit to this. If Christianity is in such rapid decline, why does attendance data from Gallup show that church attendance has been amazingly steady for 100 years? 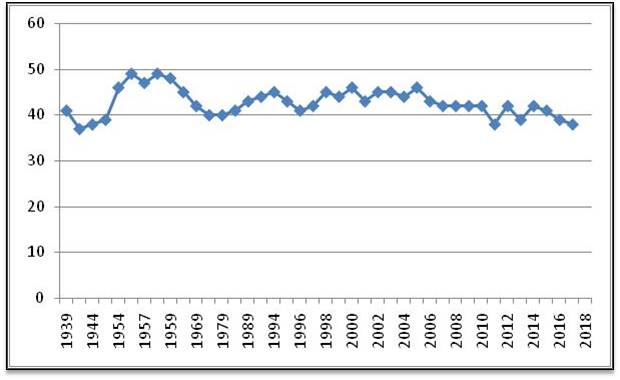 (Sources for data come from here, here, and here)

You would think that if there has been a drop off in Christians, then people would stop showing up at church right? Is it possible that something else has been going on? Two sociologists are very helpful on solving this puzzle. Rodney Stark (Baylor) and Bradley Wright (UConn) have both written on this subject. I am going to engage Wright for the most part but Stark is also helpful and I will quote him as well.

Wright, in his book, "Christians Are..." discusses the rise of the 'nones' - the group of people that, when surveyed on the phone, responds to the question, 'What religious affiliation are you?' with "none." Sociologists have been noting that this group has been growing over the years. The latest Pew Study is just further evidence of a trend that has been going on since the late 1980s. Here is a graph (sorry about the quality) from Wright's book: 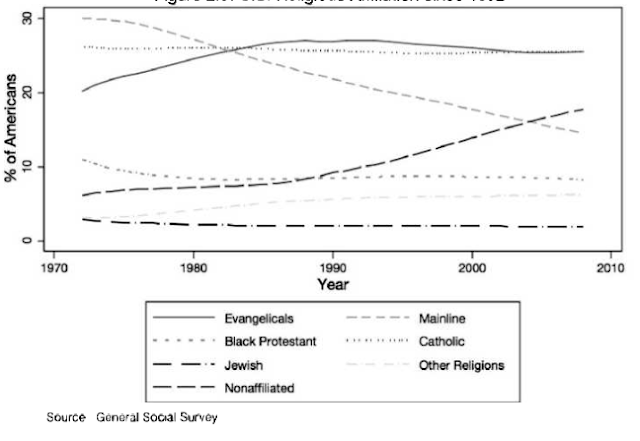 Notice the sharp uptick of the 'Unaffiliated'? Pew's recent study just shows that this trend continued to the right of the graph for the next decade. The last data on this chart shows just under 20% unaffiliated and Pew shows that now that number is close to 26%.

What Bradley Wright notes is that there is another sharp trend on this chart: the decline of what sociologists call 'mainline Christianity.' Mainline Christianity are the old major Protestant groups such as Presbyterians (USA), United Methodists, Episcopalians, Lutherans (ELCA), American Baptists, and Congregationalists. These denominations have something in common. Every single one of them became very liberal. The first embraced female pastors, then they embraced abortion, then gay rights. The conservative denominations (Evangelicals, Black Protestants, Catholics, etc) have had no drop off. And the drop off of the Mainlines continues. A couple years ago, Pew did a study on this group. 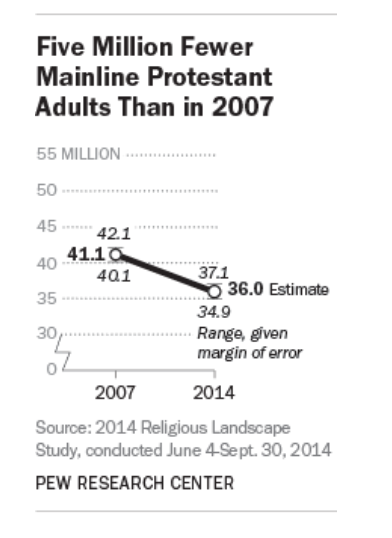 Hmmm. That number seems pretty similar to the drop off we saw in the new Pew Study. So, based on these data, I think it is fair to say that a good portion of the decline in what Pew defines as Christianity is coming from this group.

But... isn't that still Christianity? Isn't that evidence of a change? Well, I would argue in name only. Based on attendance not changing much, it does not appear that the people who once called themselves Presbyterians or Methodists did much in the way of attending church. But it does not appear that they changed their beliefs much either. Consider this chart also from Wright: 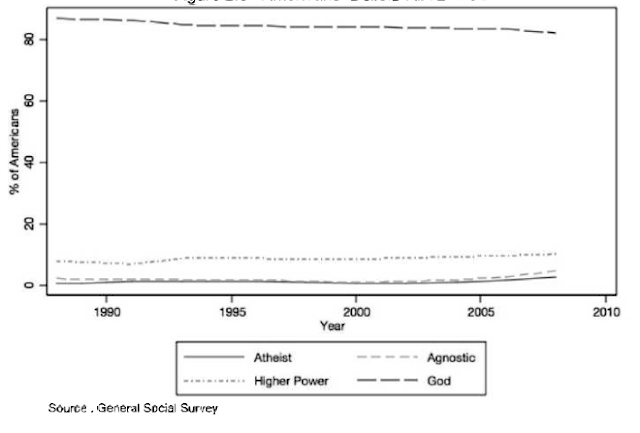 Despite the rise of the 'nones' beliefs did not change much. In fact, nones are not exactly secular. Wright notes that 78% believe in God or a higher power. Over half believe that the Bible is the word of God. Almost half pray daily. And three fourths of them consider themselves, spiritual. In short, this group believes a lot like they did when they still called themselves Mainline Christians. The only measurable change in this group is that when you ask them what religion they are they say, "none," instead of Christian. But their behaviors (not attending church) and beliefs (a fuzzy belief in God and the bible) appears to be exactly the same as it ever was.

So, why would this group (that did not change beliefs) stop saying, "Christian" when asked. It is hard to say but I would argue it probably has to do with social credibility. In the post World War II era, with the communist scare and a broadly positive view of Christianity in popular culture, it was socially beneficial to say, "I am a Christian." But now, there is no such benefit. Popular culture, academia, and much of social media is decidedly anti-Christian. For many, it has become much less beneficial (and sometimes expensive) to say, "I am Christian." And since this group always held their Christianity with a loose hand (not attending church or believing in hard doctrines) they are not bothered by the change.

So, in short, the Pew Study is misleading to say the least. The USA is not going through a giant religious change with many people exiting the church. In general, not much has changed in the US landscape in the past generation. Church attendance is the same, beliefs are the same, and the only thing that has changed is what you say when someone from Pew calls.