Why Thoughts and Prayers Are a Good Thing 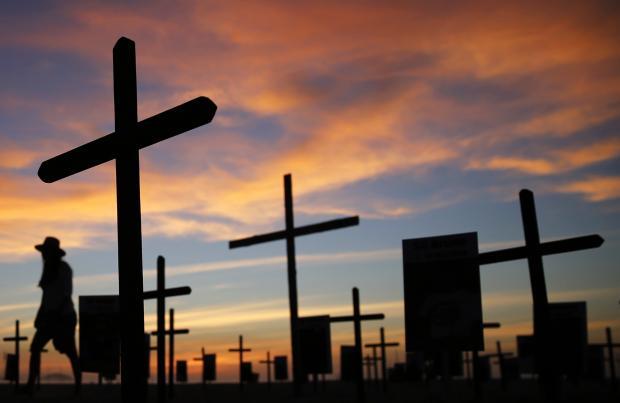 As we look at the suffering from the recent spat of shootings, or from the recent hurricane, or from various wars and famines around the world, there is a tendency among anti-Christian folks to mock the idea that God is in control. People laugh at Christians for sending, 'thoughts and prayers.' Even mainstream democratic political candidates are now in on the mocking.

In this mocking there is a clear assumption that the suffering in this world is proof that God is doing nothing and prayers do not matter. It is rarely articulated explicitly but the implicit statement is that this suffering continues therefore either God is evil or nonexistent.

A couple years ago, this meme was going around the internet: 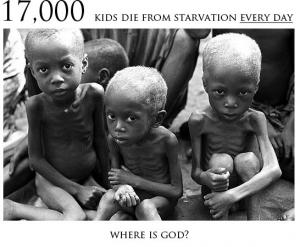 But anyone with even a little knowledge of the Christian faith should know that Christianity has always acknowledged that there is evil in the world and that sometimes this falls upon people who did nothing to ask for it (such as kids). What is the Christian answer? The short answer is found in Job. Job is a story of a good man who suffers evil and God's answer to him is basically: "the reason is beyond you." We don't like that answer. We like certainty and detailed reasons. But if God is infinite and we are finite there are always going to be times when God's reasons are beyond us. But we do know some things. The first thing we know is that God is going to work out this world for good. The words of the great Russian author Dostoevsky should be heard at this point:

“I believe like a child that suffering will be healed and made up for, that all the humiliating absurdity of human contradictions will vanish like a pitiful mirage, like the despicable fabrication of the impotent and infinitely small Euclidean mind of man, that in the world's finale, at the moment of eternal harmony, something so precious will come to pass that it will suffice for all hearts, for the comforting of all resentments, for the atonement of all the crimes of humanity, for all the blood that they've shed; that it will make it not only possible to forgive but to justify all that has happened.”

Another thing we know is that God cares. God came in the person of Jesus and Jesus wept when he attended funerals. He walked around healing and loving people. More than that, he died to end death and suffering sacrificing himself to heal the world. God incarnate was the picture of someone who deeply is concerned about the sufferings in this world. If you put those three things together you get the following statement: 'We do not know why suffering exists in this world but we do know that God will heal this suffering and somehow put everything right. And whatever the reason God allows suffering, we can be sure it is not because he does not care.' I think that is a wonderful statement that offers hope to the hopeless and encouragement to the lost.

And another thing I should note: A huge part of the Christian faith is the call to serve the poor. We are called to live out the end (when things are put right). We are called to help the poor, sick, and hungry.And Christians do in amazing numbers around the globe.

But of course no effort to help the poor will be perfect. There will always be people who, for a variety of reasons, cannot be reached.

What do we tell them? What do we tell children like those in the above photo? Consider the two views.The Christian view says "Child, God weeps with you. These things are in the hands of a good and almighty God who allows suffering for a time but will put things right. Trust in him and fear not. You can walk through the valley of the shadow of death and yet God is with you. In the end, even death is not the end. God will raise you up, nourish you, and bring healing."

Now consider what the atheist must say, "Life is short, brutish, and pointless. Sorry no one helped you. The death that surrounds you has no cure."

Which view is a bigger blessing to the poor?

Those mocking the idea that prayer matters, the idea that God is in control, are doing so in an effort to advance certain political positions (usually more gun control). I doubt that their political efforts would change anything but even if they did make a huge impact (say cutting homicide rates in half) that still would leave many suffering, dying, and crying. And if any hope of a God that cares has been removed, what do we tell those people? My guess is that they would offer another political plan. And then another one. And then another one. Forever. The idol they offer is government.

But that is small consolation for someone that has already suffered. Already lost a loved one. Already buried a child. No. A promise of an Elizabeth Warren 'I-have-a-plan-for-that' sort of a thing is no consolation to them.

But.... it is a true blessing to those who have suffered is to say, "We are thinking about you. We are praying for you. Your child is in God's hands. You will see him again. Death is not the end. We don't know the purpose but we do know there is one. Be at peace and draw near to God who guides all things"

Stop mocking thoughts and prayers. It is mean. And it is wrong.