Transgender as a Natural Result of Wealth and Decadence 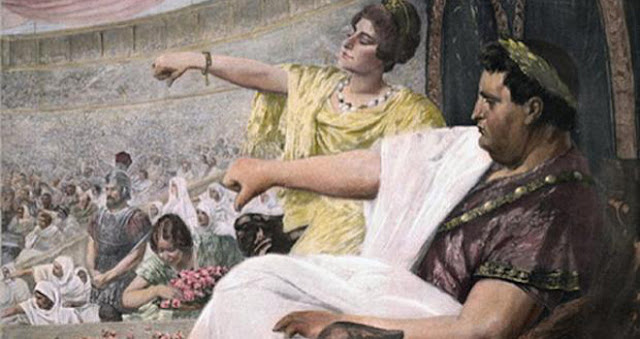 [This article is new but it includes excerpts found in an earlier article.]

Modern society has an alphabet of different sexualities.  Depending on who you talk to, the letters are now, LGBTQIA. I would like to take a moment to talk briefly about the "T's." As I have discussed earlier, the LGB's are a strange new set of identities that would have made no sense in ancient Greece or Rome (or most ancient societies).

But what about the T's? The T stands for transgender and is an interesting addition to the LGBT alphabet when viewed through the lens of ancient thinking. Because in ancient days, this would have been viewed as a very different thing altogether from the L, the G, and the B. As previously argued, those first three letters would have been as meaningless as asking someone if they ate only Chinese food or only Mexican. The answer would be a confused stare. Men of privilege were not limited in their sexual tastes in these neat categories and often experimented and fooled around with all sorts of sexual experiments (prostitutes and slaves were fair game and few taboos existed). As I showed, it was acceptable for battle hardened men to engage in homosexual activities (presuming they were 'on top').

But when it comes to T, there was a category for that in the ancient world (I am limiting this to Rome and Greece but I have found that many of these truths apply to other ancient cultures). It was called effeminacy or acting like a woman. It was not unheard of to modify genitals to imitate a woman's, it was called castration of the penis (something only skilled surgeons could do). But, in almost all cases, these sorts of things were things that were done to you not things that you would do yourself by choice. In fact, they were usually a sign of the most horrible results of losing a war.

For a free man, it was considered quite taboo to act effeminately. If you were a soldier, you didn't act like a girl. This is why it was considered shameful for a nobleman to be the 'receiver,' in a sexual encounter with a male slave. So even in a world where manly men didn't shy from taking a homosexual lover from time to time (even while also having wives), gender roles then were well established and violating them was considered shameful (or comical depending on the context).

Now, I should include the obvious note that the ancients didn't quite have what we have. Transgenderism in any sort of modern sense requires modern technology. Plastic surgery and hormones enable a transformation that simply was not possible just a century ago. But the idea of changing your behavior and getting some sort of surgery to change genders would have been recognized.

Let me provide a horrific example: Nero and Sporus. If you know anything about Nero, you probably know he was a monster and this story demonstrates that well. Nero's wife, Poppaea, was apparently the one human that he apparently cared for. But she made the mistake of coming into his presence while he was in a bad mood. Despite being his favorite human and despite being pregnant, Nero kicked her to death - nice guy.  But relevant to our subject is what happened next. Nero was terribly distraught by what he had done. He wanted his wife back. He longed for her so much that he had his men scour the world for a lookalike. But no woman of her beauty and appearance could be found. But they did find a young man named Sporus who was a dead ringer. And, unfortunately for Sporus, Nero was fine with that. He had Sporus castrated and then married him. Sporus was transgendered involuntarily. And while Nero's perversion was uniquely public and decadent, he was not alone in taking sexual pleasure in castrated male slaves. It was not strange to take slaves, chop off their manhood, and then treat them like women.

Again... almost always involuntarily. But we do have at least one example of an emperor that would dress up like a woman. Elagabalus  is listed by some modern scholars as a transgender emperor. But the ancients had a category for this behavior: decadent. It was viewed a sign of wealth and safety when men started acting like women. Spartans despised this sort of behavior.

And maybe this explains why Americans are now embracing this.... maybe effeminacy really does come with wealth and safety.... maybe it really is a sign of decadence. In the past 70 years, we have been going through a period of dramatic decadence. We have achieved wealth and technology that no longer requires much physical labor. Boys don't wrestle and fight as much. Kids are stying inside playing video games. We have not had a major war since Vietnam. A small percentage of men enter the military. We are a whole society that has achieved decadence that for the Romans and Greeks only belonged to the wealthiest citizens.

Now, I think that the rejection of the Christian view of the body plays a part. But I think we cannot dismiss what was once considered considered common knowledge: get rich, get safe, don't promote manliness, and you get effeminate.