- September 18, 2019
Conservatives are taking great joy in the recently revealed photo of the very self righteous liberal PM of Canada wearing dark brown make up as part of an 'Arabian Nights' party in 2001. The standard among our easily triggered, racism-is-behind-everything culture that we now live in is that any sort of dark paint on your face is 'racist.' And photos of Trudeau (the darling of the woke left) wearing what is now considered a racist costume is almost too much much poetic justice. 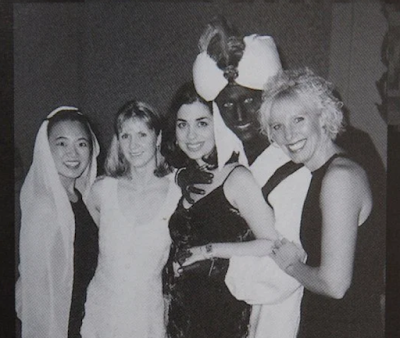 But can I just point out that it is not actually "racist?" Almost all costumes are intended to be exaggerated representations of things we are not. If I dress up like a pirate, I put on an eye-patch, a hook hand, and a peg leg. If I dress up like a Viking, I wear a fake beard, a horned helmet, and carry a sword. If I dress up like Lieutenant Commander Data from 'Star Trek the Next Generation,' I would slick back my hair, wear a one piece Federation uniform, and ......apply a light silvery skin coloring to complete the look. 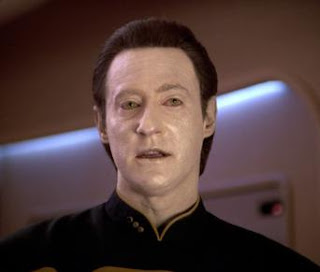 Yes, you heard that right, I would change my skin color to match (albeit in an imperfect and exaggerated way) a character that I was trying to impersonate.

Doing this would not be racist, obviously (there is no real race of sentient androids). In fact, doing so would only mean that I was trying to replicate some of the most obvious features of the character so that people would know who I was. Without the skin color, people might think I was Commander William Riker or Captain Picard or some random engineer in the transporter room. With the skin color, people would have a better idea.

Why? Because one of the most obvious features about us is our skin color. When we are describing someone, we go for the obvious stuff. Hair color, height, and...... skin color. Without as many of these obvious things as we can possibly include, people will not know who or what you are trying to be - which is the whole point of the costume!

If you want to be Conan OBrien? You wear a red wig and powder your skin lighter. You want to be 'Tan Mom?' And you are not going to do anything to your skin? Really?

There is obviously nothing racist about this given that all the people involved are white (or androids) but I don't think that this suddenly becomes racist when the person is of a different race. The same principles apply - you dress like the person, wear your hair like the person, and try to mimic the skin color of the person. The sentiment that our cancel culture has adopted in the past few years that this is automatically racist is ridiculous. 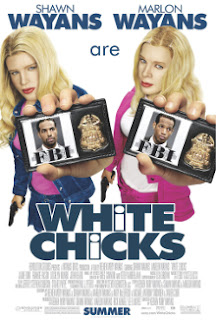 Now obviously, I am aware that black face and exaggerated portrayals of African Americans can be racist. It is of course possible to portray someone in a way that is intentionally hateful, exaggerated, and bigoted. There are obviously many examples of this ('Birth of a Nation,' Mammy, Sambo, etc). But the just because the coloring of skin has been used in racist ways does not mean that absolutely every time anyone colors their skin for a costume that it is hateful and bigoted. When Jimmy Kimmel dressed up like Karl Malone, that was not racist - obviously. Kimmel likes Malone and his portrayal was in no way intended to mock his race. The reason he did it was that a bald and bearded Kimmel would not look anything like Malone. The skin color (being one of the many obvious visual things about humans) helped complete the outfit. Similar incidents with Fallon and Sarah Silverman demonstrate the same point. These comedians are quite outspoken in their dislike for racism and didn't suddenly become racist for these portrayals. They were just dressing up like people before we decided as a society that any sort of skin coloring was racist no matter the purpose or intent.

And that is ridiculous.

So, as fun as it is to see Trudeau getting caught in a storm of liberal hate (given that he is one of the heroes of the liberal crowd), his outfit in that photo is not (necessarily) racist. As much as I dislike the guy, I doubt he was actually trying to mock a whole race of people with his 1000 Arabian nights get up.

Finally, a Trudeau outfit that should be more offensive to everyone is this one that did not include any skin coloring: 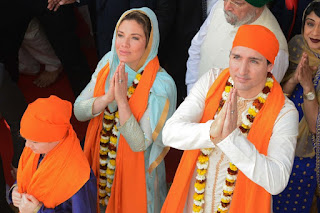