Explaining the Joke- to myself 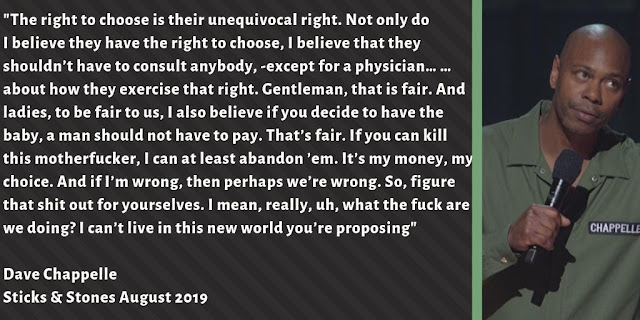 I know I have been posting a lot of Chappelle content recently. That speaks to what a thought provoking special he gave us. I recently explained one of the jokes in his special that I thought people were getting backwards. But I also suddenly realized that I got a joke backwards as well. When I wrote my original review of ‘Sticks and Stones’ I had two criticisms. First, I thought making fun of Michael Jackson abuse victims sucked. And second, I disagreed with his abortion comments. I standby the MJ comments but I now realize that I missed the point of the abortion comments.


Chappelle started off repeating the standard pro-abortion position: women have an absolute right to abortion. No man should have a say. This is where he lost me. As a pro-life advocate, The flaws in this position bug me to no end. So I tuned out what he said next. But what he said next is brilliant. He said that if women have this absolute right to kill the baby, men should be able to abandon it. He then said, “and if I’m wrong, maybe we’re wrong.”

This conclusion to the joke reverses what I hated. Far from affirming the liberal position, Chappelle was noting the humanity of the unborn baby and arguing that we need to be consistent. Either it is a baby or not. Either any choice is acceptable or not. But blindly saying that the woman should choose is inconsistent. This might not be a pro-life argument but it sure is not the pro-abortion argument.

I’m growing to like this special the more I think about it .