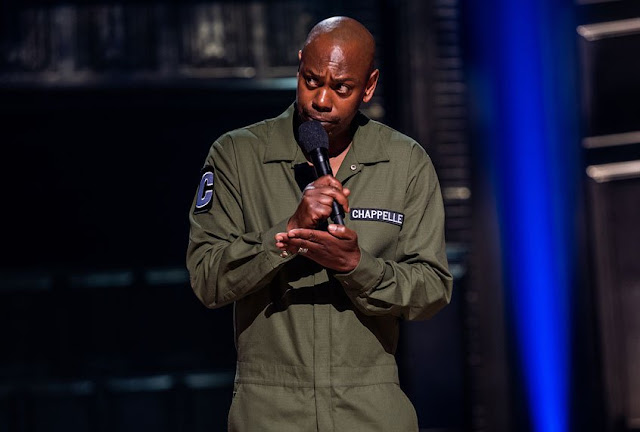 Explaining jokes sucks. Once you have to explain it, it is not funny. And there is something funny about letting the clueless person stay clueless. But every once in a while, there is a reason to do it. I typically do it when people are taking a joke exactly backwards. And I think that this is one of those sorts of jokes. But more than getting it backwards, I think people are missing a very brilliant critique that I want people to see. Dave Chappelle's Netflix Special, "Sticks and Stones," had a joke that went like this, [sorry about the video quality and can't promise this video will be live long.]


Here is the joke transcribed:

"Trans people were born in the wrong body. And you have to admit that is a f----ing hilarious predicament. Its really f----ing funny. If it happened to me you would laugh, wouldn't you? It wouldn't be funny if it happened to me? I think it would be. What if I was Chinese but born in this [n-word] body? And for the rest of my life I had to go around making that face. [Chappelle now does a stereotypical and racist Chinese face with his eyes slanted and teeth sticking out.] Hey everybody, I'm Chineeeeeese! [And people would say,] 'Stop it Dave, that is offensive!' What?This is how I feel!"

This joke has been noted by several critics as being both racist and anti-trans. But they are getting half of this exactly backward. It is not racist at all. In fact, it is taking the fact that racism as bad as the whole core of the joke. But it is a devastating statement against the trans movement.

What Chappelle is noting with his exaggerated Chinese voice and face is how it is both ridiculous and offensive for people born male to dress up like women, put on an exaggerated and stereotypical act of being a woman, and then justify it all based on how they feel. As humor does better than anything, this is a body blow tot he LGBT argument on this that is much more effective than any sort of serious critique.  And I understand why the LGBT folks are upset. But no Asian should get upset by this. His whole point is that acting like that is racist. To call him racist for this is to not get the joke.