Against Separation of Church and State 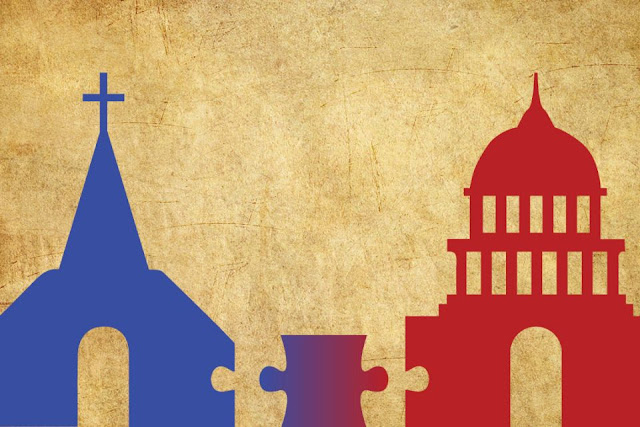 The phrase separation of church and state in today's language means that those in the employ of government institutions (schools, congress, courts, etc) need to keep their religion at arm's length. If a teacher is religious, that's fine but she should avoid expressing that in class. If a politician is religious, that is fine but he should avoid legislating based on his religious convictions. If a judge is religious,  that is fine but he should rule without reference to his faith. State land should not be used for religious ceremony or if it is, it should be generally opened to all religions (including Satanism). When politicians or state employees violate this "separation of church and state" there are a crowd of atheists who are just waiting to file lawsuits.

If this is separation of state, I am against it. I am against it because I actually do not think it is true separation of church and state. I think it violates the first amendment by establishing a religious view: secularism. When state officials are forced by law to not reference their faith or to treat all faiths the same, we are in essence making one of two religious claims. Either, religion is unimportant and should not be mentioned or all religions are basically the same and should be given equal preference by those in positions of power.

Those are both very questionable claims. Few people agree with them. And, I would argue, this was not the original intent of those writing the constitution. Let's look at the First Amendment of the US Constitution:

Congress shall make no law respecting an establishment of religion, or prohibiting the free exercise thereof; or abridging the freedom of speech, or of the press; or the right of the people peaceably to assemble, and to petition the Government for a redress of grievances.

The key here is establishing an official religion of the state. The issue at stake was that the English government had established the Anglican Church as the state church and imposed different taxes and rules on people that were Baptists, Catholics or etc. The founders did not want this. They wanted freedom from unfair and unequal treatment by the state. But what is not said here is that government officials (teachers, judges, and legislators) should have their own faiths silences or restricted. They founders did not say that a teacher could not lead he class in prayer. The founders did not say that congress people could not pray as they considered legislation. In fact, both those practices were done by the founding fathers. Ben Franklin (one of the most secular of the founding father's) stopped the Constitutional Convention mid-session once and called for prayer. Washington and Jefferson both oversaw state schools that taught the bible and prayed with students. If our modern sense of the phrase, separation of church and state is applied to them, they obviously also did not believe in separation of church and state.

But that phrase actually comes from Jefferson himself. In writing to Baptists worried about the establishment of an Anglican Church over the US, Jefferson famously wrote that he was for a wall of separation between church and state. But what he meant was quite different from our modern sense. I agree with Jefferson's meaning of the phrase. I agree that the state should not make laws or regulations restricting religious speech, taxing religious people differently, or any other law. Jefferson's goal was not to silence people from sharing their faith but to prevent people in power from oppressing people who did not share their faith.

But no founding father (not Jefferson or anyone else) thought that separation of church and state meant that school administrators could not be open about their own faith or that teachers should be silenced from speaking what they believe. Jefferson never imagined students being silenced from speaking about their faith during school speeches or that local court room administrators who chose to hang religious insignia on the wall should be forced to remove it.

None of that is oppression.

All of that is just individuals or groups of people speaking about what they believe. To say "I do not want to be in the presence of a person who says a prayer or paints a picture of a religious figure or whatever...." is a closed minded and backward person. Yes, I am saying that the "free thinkers" are backward and closed minded people. They are people who think that their opinion is right and they will sue and attempt to oppress a school principle who chooses to say a prayer to Jesus, a judge who chooses to hang the 10 commandments in his courtroom and a school district who chooses to say something about evolution they disagree with. I would be right there with those advancing separation of church and state if someone was trying to pass a law to tax Methodists differently than baptists.

I would be the first person to speak against someone who was trying to mandate a law to ensure church attendance or even to say the pledge of allegiance. I hate the idea of a state that forces people to act religiously. But the idea that I would sue a Jewish or Muslim administrator for saying a prayer because I disagree with them is against the core of my libertarian ideals.

But it is beyond ironic that the same atheists that call themselves free thinkers are the ones that have a lawyer on speed dial. It is hilarious that the people trying to establish religion are the ones who are the most outspoken against doing so.  No, the First Amendment is not about silencing, suing, and getting officials to shut up. It is about preventing oppression. It is about letting people do what they want as long as they do not infringe upon the person or property of anyone else. A Nativity in the park oppresses no one. A prayer in class oppresses no one. But silencing anyone (including government employees) does oppress.

So, we have separation of church and state backwards. Those claiming it are the ones that are violating it.