Why We Must Cut Spending Now

Warren Harding often claimed to have been a terrible president but but I like him. He cut the federal budget by over 50%. Coolidge cut the budget from 3.7% of the GDP to 3%. They did this while also cutting taxes. Making major cuts to the budget are possible. They are almost always painful but the pain is short lived and the benefits last years. These are the guys that gave us the 'roaring twenties.' But today, the spending as a percentage of GDP is now 21%! Our debt continues to skyrocket. We are now $22 trillion in debt to foreign countries but this does not include all that we owe to entitlements (to ourselves). Social Security and Medicare alone are projected to bring a mind blowing $82 trillion in deficit over the next 30 years.

Now, the republicans often run as the fiscally responsible party. But as you can see below it appears that it almost does not matter which party is in power. Spending never goes down. 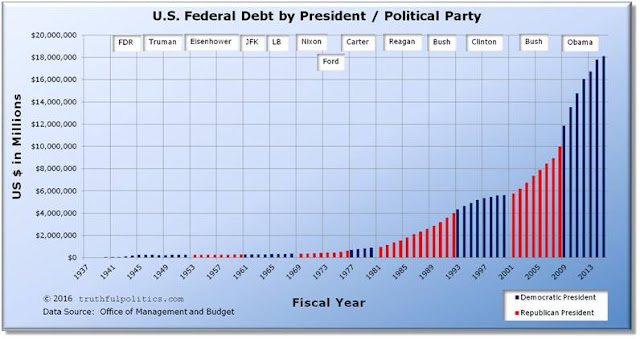 Debt never goes down. Trump came in and things did not change. We are still spending more. We are still going further in debt. The debt limit keeps getting raised. This needs to stop.

It will be painful. There will be howls and pearl clutching. Entitlement cuts will be used to scream about lack of concern for the poor. Military cuts will bring accusations of hurting our nation's defenses. This all must be expected and predicted. If cutting spending was painless, we would have done it already. But the pain is short lived. The cuts Harding made were followed by a decade of growth. Small time sacrifices will lead to long term well-being.

But without the cuts, the opposite is true. Short term peace with long term pain. As debt creeps up, the cost of debt becomes more and more expensive. Interest payments become a larger and larger percentage of our GDP. The magic of compounding interest will work against us. This is how bankruptcies happen. But we will not go bankrupt. We can print money remember? We will instead just inflate our dollar. Which means that we will be able to afford less and less collectively. The gold in our basement will turn into stone. Ruin will come by turning our dollars into monopoly money.

Unless we act now. Sadly, the  president has not accomplished this. Spending continues unhampered.