Why Gun Ownership Does Not Correlate With Homocide Rates 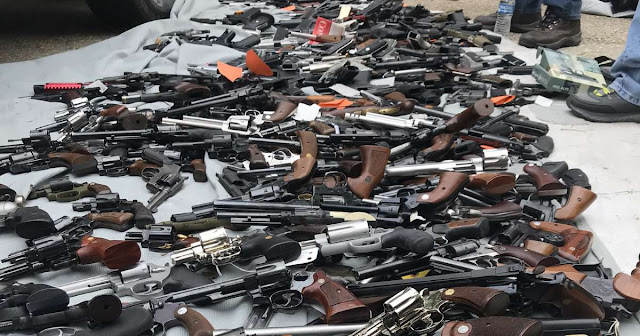 Two more mass shootings happened again here in the United States over the past 24 hours. Predictably, this became an opportunity for people to call for gun control. The presidential candidates all weighed in.

In scrolling through social media, every time a republican politician expresses condolences, a standard response is, 'you have blood on your hands for not passing gun control.'

It would seem that gun control is the answer. Well.... if you are talking to democrats.

But talk to a member of the NRA and the issue is exactly the opposite. Not enough guns. Arm enough good guys with guns and gun violence will go down. They point to times when good guys with guns saved lives (here is a nice list) and argue that gun control can't stop psychos so we should all be strapped and ready to fight back.

So, which is it? Do more guns help homicide rates or hurt them? It is hard to say but let's look at global data of national homicide rates versus gun ownership rates.

If the NRA is right, the chart should look like this: 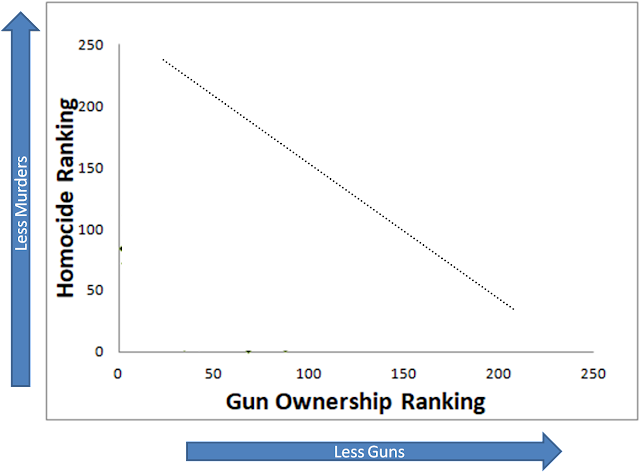 But this is not what democrats are expecting. The clear expectation of every democratic candidate pushing for gun control is this: 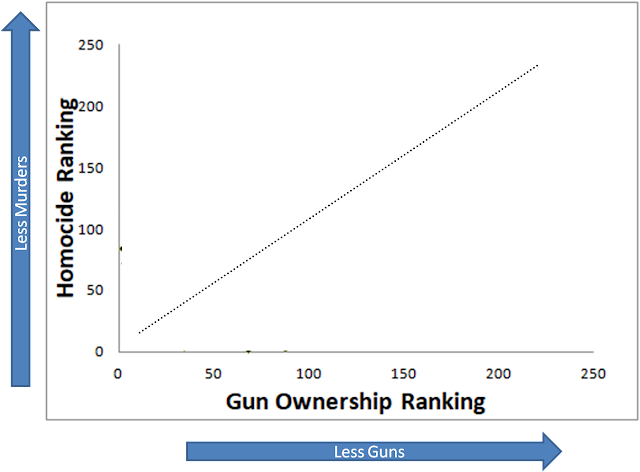 Take guns away and watch your ranking on the murder list to move toward last place (#222).

But is that what happens? Let's look at the actual data. This is a chart of each national ranking for homicide and gun ownership: 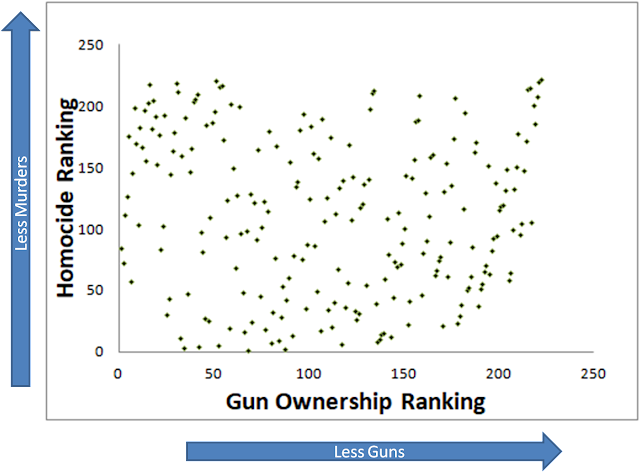 [SOURCES: For homicide rate, I used the UNODC numbers. For gun ownership rates, I used the Small Arms Survey.]

That, ladies and gentlemen, is what engineers call buckshot. It has an R-squared value of 0.006 (perfect predictive power is 1 and no correlation is 0). There appears to be absolutely no relationship between gun ownership and homicide rates.

Let's look at some details. 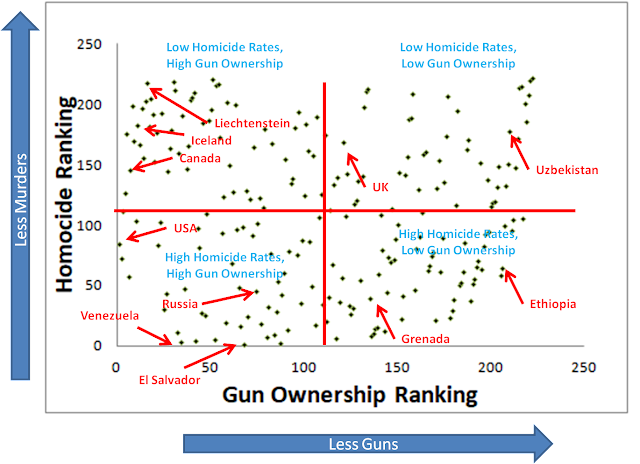 You have plenty of countries that don't appear to fit either expectation. The United States is one of those countries. The United States has an insane number of guns. The US has 120 guns for every 100 people. Yes, we have more guns than people. That is twice the number two ranked country! If the liberals are right, the US should have by far the highest murder rate. But.... we are somewhere in the middle ranked #85 in the world.

What do we do with this? Well, a few things need to be considered. The first is to keep in mind that we are not as murderous as we might gather from watching the news. Russia, for example, has more than twice our murder rate. I think the news gives us all PTSD. In ancient days, we would not hear about murders thousands of miles away, now we watch them happen. That gives us a sense that it is near and imminent. This is simply not true. The likelihood of being shot in a mass shooting is close to zero. More generally, shootings in the US are almost always between young male criminals. If you are older and not involved in crime, you have a better chance of winning the lotto than being shot.

But, I hate to break it to everyone, what the above data shows is that the solution is not going to be found in gun policy.

I have written in the past about how culture affects populations. Not every culture is the same. Some are more violent than others. Some are kinder to minorities than others. And culture certainly does affect murder rates. This is why you can have two countries right next to each other with dramatically different gun laws that share relatively similar homicide rates. Scotland, for example has relatively low gun ownership rates (5 per 100 citizens) and a relatively low homicide rate (1.1 per 100,000). Sweden, right to the North of Scotland, has more than four times higher gun ownership (23.1 per 100 citizens) but the same exact homicide rate (1.1 per 100,000).

And I would argue that this is one reason it is wrong to compare the USA to Europe as many do. Europe, they say, is rich like the USA but has, generally speaking, much lower homicide rates. This is true but many Asian countries are poorer than the USA and also have much lower homicide rates. And many nations have wealth but also have higher than expected homicide rates (e.g. UAE, Estonia). This makes it clear that income levels are not the primary cause of violence. It is culture. Culture drives behavior. Culture causes us to either turn the other cheek when we are offended or seek to murder someone when we are offended. Culture causes us to glorify violence or view it as shameful and disgusting. [Check out this chart, ignore than misleading trend line, and you see buckshot.]

Comparing the US to Europe but excluding Mexico is strange. Mexico shares a giant border with us. They are the second largest trading partner. We have a large Mexican American population. Why not compare these two nations? From a gun policy standpoint, Mexico has an almost complete ban on guns. They have a tenth the number of guns per citizen. But their murder rate is 5 times higher than the US murder rate!

The truth is that the USA has a unique culture. We are not Europe. Nor are we Mexico. The original settlers from England brought an independence that is different from Europe. Each wave of immigration has brought their own cultural influences. We are our own thing. As much as I like Europe it feels quite different when I am there. The people are different. The culture is different. Older. More comfortable. Less on edge.

And before some of the racists out there start talking about genetics. I wrote on this earlier but genetics do not explain it. London in 1400 had a higher murder rate than Detroit at its most violent in the 1970s. Obviously genetics did not cause the UK to become more peaceful. A cultural change took place.

If you are interested in reading my thoughts on how I think religion helps cultures become kinder, read here.