I do a lot of political/cultural/religious writing so I am always googling things that are controversial. I think this plays into it. Google is clearly manipulating results now. What that means is that instead of giving you what you want to find, they are giving you what they want you to find. But this is exactly the opposite of why we use Google in the first place. Google did not become the default because we liked their politics They became the default because they gave us the results we are looking for. And they simply do not do this anymore (at least not when it comes to controversial subjects).

Let me give one very clear example. With all the Epstein stuff being in the news, I was curious what conspiracy theory legend Alex Jones had to say. I should note that I am not a fan of Alex Jones, I do not listen to Alex Jones, and the proof of this is that I did not even know the name of his website. So, I googled it.

Now, the results should have been obvious. This was a question that I could have just asked to the guy sitting next to me at Starbucks. But Google struggled mightily. I could not find the website. Not on the first page. Not on the second page. There were articles from CNN and Washington post about Jones. There were articles from liberal groups denouncing Alex Jones. But not a single link to the thing I was looking for: his website.

So, I did what I have been increasingly doing recently. I went to another search engine. I tried DuckDuckGo.com. And bam! The number one result was what I was looking for. It was like DuckDuckGo could read my mind. Or maybe they just didn't think I needed to be protected like a child from information they did not like. I don't know. But there it was on the top of the first page: 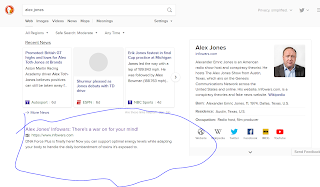 This is not the first time this has happened. I find myself doing it over and over. I think part of it is that Google is getting worse (for agenda reasons) but part of it is that other search engines are just getting better. A couple years ago, duckduckgo was worthless. Now it is consistently good. I am planning on changing my default browser to another search engine so I don't get slowed down like this when doing research.If you don't know how to change your default search engine.... google... no, duckduckgo it!