The Myth of the American Indian Genocide 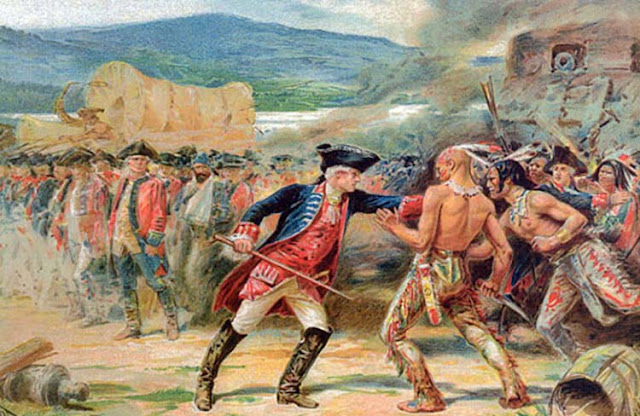 Did the Europeans attempt to eradicate the Native Americans when they came to the shores in the seventeenth century? That idea is certainly popular. "It was a genocide," is a phrase I have heard from comedians, actors, random tweeters, and even politicians. Articles such as this History Channel article speak of the genocidal efforts of the White Europeans as they came to North America. Others speak of the intentional spread of small pox. Others speak of the stealing of land and the driving out to the edges of society.

But is this true? Was there any sort of successful effort to kill or destroy the indigenous peoples of the Americas?

It is certainly true that American Indians died in mass numbers after the appearance of the Europeans on their shores. Estimates vary on how big the population was before Columbus arrived but it is thought that the population dropped by more than half at least. But the cause of this horrible death was not genocide. It was disease. Smallpox specifically. And this was not intentionally spread. There are no known successful attempts to spread smallpox and the disease swept through the Americas much faster than the Europeans did. Jared Diamond in his groundbreaking "Guns, Germs and Steel," recounts stories of conquistadors showing up at cities ready for battle only to find them empty and abandoned. The fact that the small band of Europeans was able to rout the great empires of the Americas should show that there was something else going on.

The Europeans had been living with smallpox for centuries. Plagues and diseases had decimated Europe and as a result the survivors were heartier and healthier and more likely to survive diseases when they came. Diamond argues this was probably due to the close proximity they lived with animals.Whatever the reason, Europeans showed up to a surprisingly empty New World. Far from stealing the land, they were able to settle in areas that were sparsely populated or empty. When wars did happen, it was often the American Indians that were the aggressors. In the excellent book, "The War that Made America," author Fred Anderson argues that, lacking women thanks to the damage of smallpox, Indians would raid frontier cabins, kidnap the women and children and take them back to their tribes.

Now, you might say that the land belonged to the American Indians and Europeans had no right to take it even if it was sparsely populated. But a few things need to be considered here. First, lumping together all American Indians as though they were monolith is sort of racist and historically inaccurate. Many tribes lived in North America and large areas of the land changed possession between tribal nations on a regular basis. It is unlikely that any particular tribe was the original owner of any particular piece of land. Another consideration must be thought of is that almost every nation throughout the world and throughout history took their land from someone who was there first. This is true for almost every American Indian tribe. True for every European nation. True for every African nation. Like it or not, wars of conquest are how the story of human existence has unfolded. Singling out Europeans as any worse than any other group in history in this department should not be done. And it is further important to note that the English did wars of conquest on people of all races. Ask the French. Ask the Dutch. Ask the Irish.

So, the displacement of the American Indians was not the result of racism. It was the result of the tragic spread of a disease coupled with some smaller wars of conquest that were not unique to people of color.