Okay here is the good news. The murder rate in Detroit has been going down for years. But with every bit of good news this city has.... there is a downside. It is clear from the data I have analyzed over the past 15 years that dropping murder rates also means dropping win rates for the Tigers. Science can only speculate on the cause. Perhaps gun fire in the air keeps players on their toes. Perhaps safety concerns keep players longer hours at the stadium practicing. Another interesting theory that I have heard some social scientists put forward is that perhaps the players think that violence can only be fought with excellence on the field. The research is still raw here.

I should note that the research I have done shows that this a Detroit only phenomenon. Something about this city causes baseball players to pay special attention to violence.

But enough talk, let's get to the science. I plotted wins by the Detroit Tigers versus murders in the city for the past 15 years. Here is what I came up with: 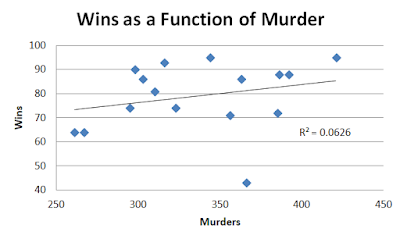 A clear trend can be seen.


Now, I don't want to overstate my findings.  It should be noted that the r-squared value is only 0.06. That means that the contribution of the murder rate to the win rate is only 6%. So, we have to acknowledge that many non-murder related factors (player talent etc) should be considered when evaluating how the Tigers will do. But 6% matters. That adds up to almost 10 games over the course of the 162 win season.

Now, I want to be clear. I will take this trade off. Lower murder rate are certainly more valuable than a few extra wins for the Tigers.

But science is science.

Also, a lot of people are saying the Tigers might be on schedule for the worst season in their history. But the murder rate ticked up a bit this year, so I think they might end strong. We'll see.

[The above is my answer to those who say that IQ and income having a relationship with a 0.09 R squared value is a meaningful thing.]