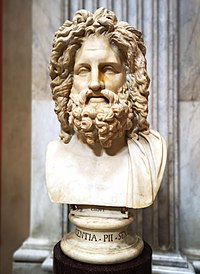 When Julius Caesar traveled north into Gaul he was shocked at what he saw. The people there were dirty, wild, superstitious, ferocious, illiterate, and libertine. They would fight naked (apparently simply to show bravery), their women would come to war with them. If they won, they would take enemy heads as trophies. They would paint their faces.These people were barbarians.

And the Romans knew that they were inherently superior. Northern Europeans could never be civilized. The best thing the Romans could do for them is to keep them under control by brute force and impose the Pax Romana on them.

But what the Romans saw as inherent to the people turned out to be cultural. In time, the Germanic tribes of the north adopted Roman customs and slowly became, at least a little, civilized.

But let us write ‘civilized’ with a small “c”. Both for the Romans and for the Gauls. Because their idea of civilization and ours are two different things. The Romans, for all their sophistication, were not exactly saints. For just one very uncivilized example, let us consider Roman slavery. Their slavery was nasty. They did the normal things slave owning societies do (beat, mistreat, and abuse) but they also practiced sexual slavery with horrible delight including raping young girls, young boys, and making of men into eunuchs for sexual purposes. They were at almost constant war. And they had little patience for any sort of dissent or rebellion.  In these cultures, we see nothing of the high culture of, for example, Victorian England.

They also practiced widespread infanticide, their national pastime was watching people fight to the death, and they were in a state of almost constant war. The Romans may have been more advanced than the Gauls but they were hardly a society any one of us would call good or just. And they were the best the world had to offer. If you traveled to Africa, Asia, or the Americas, with the possible exception of the Chinese, you would see more uncivilized and brutal societies with as much slavery, infanticide, and war and maybe some human sacrifice mixed it.


So, what happened in Northern Europe that took the typical man living on the British Isles from a wild face-painting barbarian to something more like a character on Downton Abbey? The answer is not genetics (that have largely remained unchanged) it is not some sort of natural progression of humans (you can find similar brutality in many nations today). The answer is culture.

Culture shapes a people much more than genetics or time does.

What drives culture? Religion does. Cult is at the heart of culture. The assumptions we make about life, our enemies, the poor, our families, war, charity, and everything else that makes up a people are worked into a society like yeast in the dough over years and years by the gods they worship. People become the gods they worship. They are the images of their gods.

And when we look at what we call civilization, the first world, you can see that "western values" are actually largely Christian values. Adopted by the west, assumed to be self evident, and taught to the world.

England transformed over 2000 years. Not in a straight line. The Romans conquered them. Then the Romans left and the English went back to their wild ways. Then in the seventh century Christianity came to the Island. And it was Christianity that started to work, like yeast through dough, to change this wild people. Not all at once. In London in 1400, the murder rate was still higher than the murder rate in Detroit during the 1970s. But changes were happening.

Christianity has a softening effect on people. While a wild Gaul might think nothing of displaying a severed head in his living room, the Christian faith teaches men to love their enemy and pray for those who despitefully use you. The slavery of the Roman Empire faded as Christianity spread throughout Europe.  The first thing to go was sexual slavery. Christians viewed this as forced sin and therefore, wherever they had power, they made sexual slavery illegal. Historians note that a good way to track the spread of Christianity is to look for laws on sexual slavery. Secondly, enslaving fellow Christians was frowned upon. As slaves were baptized, there was mounting pressure to free them. Rodney Stark notes that by the 6th century (shortly after Christianity became a majority religion in the Roman Empire) slavery was almost completely gone. Every major Empire in history had slavery as a major component of their economy until this moment in history. It was a remarkable thing.

None of it is in a straight line. But by fits and starts, Europe was becoming civilized with a big C. And that C was almost completely aligned with the C that stood for Christendom.

When we look at maps of the world today, we see that poverty is largely located in Africa, South America, and South Asia. Folks like Charles Murray, like the Romans of old, wonder if these people are capable of civilization. But a few things need to be noted, first, relative to the United States, England, or Germany today, they might seem poor and crime filled but relative to these same regions just a few centuries ago and they would seem like the pinnacles of civilization.

Lin Manuel Miranda, author of the musical Hamilton, says that he got the idea for doing a rap-themed musical about the founding father because Hamilton’s life “embodies hip hop.” And that is an appropriate analogy. Alexander Hamilton’s life would fit in well in some poor intercity environment. He was the bastard, son of a whore. He was born in the Caribbean and moved to New York. When he got here he slept around even after his marriage including with the wife of another man. He got in arguments with everyone and eventually was shot dead in a duel. America in 1790 was much like Haiti in 2019. But both are way more advanced that Germany in the first century.Culture. Not genetics.

And the base of culture is cult. Religion. Religion matters.

Niall Ferguson, an atheist, highlights the adoption of Christianity as a cause behind the rise of the west. He says that the religion offered Western Europe shared morals, higher levels of trust, work ethic, and other values that simply did not exist before. The Reformed Anglican culture had particularly high levels of emphasis on hard work, industriousness, and trust. It is not surprising then that England and English colonies outpaced all other colonial efforts in Europe. The USA, Canada, Australia, Singapore, and Hong Kong are all examples of successful English colonies. No other European nation can list so many examples.Look at those maps again. The first world is a picture of the places Christianity has been the longest or the places where England brought its culture. You might note Japan and Korea as exceptions but Japan is not really an exception. Japan at the end of the 19th century went through a radical transformation where they tried to copy everything about English culture and while they maintained a distinct Japanese culture, the effects on their economy were profound. Korea, likewise, has been profoundly impacted in the last 50 years by the culture of the United States (thanks to the Korean War) and by Christianity (that has grown to represent a third of the population).

Assuming that the world progresses naturally is a mistake. Culture is the key. Improve the culture, improve the society. And at the heart of that is the gods that that society worships. Cult defines culture.


Recommended Further Reading
How the West Was Won by Rodney Stark
Civilization: The West and the Rest by Niall Fergusson