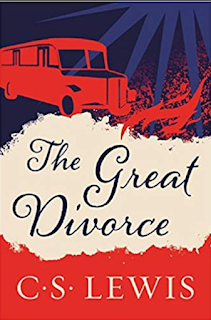 If I had to name one author that has impacted my life the most it would be CS Lewis. I first encountered him when I was a child reading the Chronicles of Narnia. I enjoyed the stories and the adventure. I didn't read him again until I was an adult and trying to figure out if Christianity was true or not. I read, "Mere Christianity," and found it important and thought provoking in my acceptance of faith as an adult. Then, when I had kids, I started to read them the Narnia books. It was as I read these books again as an adult that I think I first truly recognized the genius that is CS Lewis. These are children's books but they were so profound and thoughtful that I suddenly realized they were more helpful to understanding life than a whole stack of books by famous theologians or philosophers. After reading Narnia again, I decided to read some of his other works. I read his Space Trilogy. I read Miracles. I read the Abolition of Man. I reread Mere Christianity. I read a Grief Observed. I read Till We Have Faces.I read Surpised by Joy. I read the Problem of Pain.

But the book I would love to highlight here is the Great Divorce. This book is an imagined picture of someone leaving a gloomy city (and vision of hell) to visit the border of beautiful country in the mountains (a vision of heaven). He rides a bus full of others from the gloomy city and they all get out and are approached by residents of the heavenly place. Each person is approached by a friend or associate they knew in life. These friends then attempt to convince the residents of the gloomy city to join them. But one after another the residents refuse the invitation. Each has his or her own reasons.

Each gloomy city resident seems happy to see the person from the heavenly place. But as they talk about issues relating to their sins, their hopes, and the Divine, each loses his or her desire to go forward. The conversations are so perfect. They are full of deep insights into our own excuses and reasons for doing wrong, rejecting right, and failing to follow God. Each dialogue is like watching a little conversation that many of us have had in our own hearts at various times in our lives. A cynical man convinces himself that the whole thing just sounds contrived and must be some sort of a trick. A proud bully of a man won't go because he realizes that the place is full of people who are beneath him. A woman who spent her life nagging her husband is so upset that anyone could think she did anything wrong refuses to enter and leaves offended. An artist refuses because he realizes that embracing God would hurt is reputation as an artist.

A small man (Lewis calls a dwarf), is approached by a woman he knew. He asks her whether she has missed him. She, being in heaven, has not but she does not answer directly. She says that he will understand if he will just come with her. But her refusal to state that she missed him convinces him that she never liked him. He starts to badger her about this. She then admits that love in life is often selfish and not genuine. It is often more a desire to be loved than to truly love. But what about now, the dwarf asks, does she need him now? She laughs. She is in the presence of God and she needs nothing. That is just too much for the little man. The idea that he is not needed is a plain insult. He decides that he must leave at once. She plaintively asks him to stop talking like that and this encourages him for a moment but it becomes clear that her request was aimed the way he was talking. She says that he is acting. He is not really offended but is playing up the pity as a way to get love. She then says,

“Pity was meant to be a spur that drives joy to help misery. But it can be used the wrong way round. It can be used for a kind of blackmailing. Those who choose misery can hold joy up to ransom, by pity.”

With amazingly perceptive observations such as this, Lewis finds the idols that we all cling to. I found the above example a perfect one for our own day that embraces the 'victim culture'  and uses pity as a weapon. And this is what makes this book so good. In this narrative and the many others, Lewis finds the idols that we all cling to and destroys them one by one. It exposes our own tendency to shallow, faulty, and hypocritical thinking in a thoughtful and deep way. It is a bit painful being poked like that but Lewis writes with such skill that it is a delight to read nonetheless.

Lewis is famous for saying that hell is locked from the inside - it is not that God banishes us but that we refuse to follow God. This book, better than any other, points to this truth.