A Review of "Sticks and Stones," by Dave Chappelle 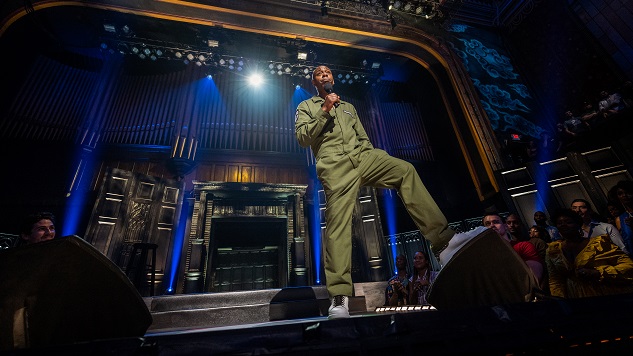 Ok.... I am not sure how to review Dave Chappelle's new Netflix special. If all you care about from a special is getting some genuine laughs, Chappelle will not let you down. I laughed at various times throughout this and at times I laughed to the point of almost crying. Chappelle is a funny man who remains funny. But I think we all realize that we can laugh at times and have it not feel good to laugh. In school, your buddy makes fun of disabled girl, it is funny, you laugh, then you walk away feeling worse about yourself for having laughed. This is a bit of how I feel about this special.

Chappelle's last few specials have been a bit like this one but never so pronounced. His style of comedy takes you down a very serious, controversial political or social hole, and then releases the tension with an insightful and funny joke about the whole thing. It is unsettling but it is funny.

One thing I like about Chappelle is his lack of PC woke-ness. Like Norm MacDonald and Bill Burr, he is willing to say things everyone is thinking about sensitive topics like feminism, LGBT, and politics but are too afraid to say out loud. Chappelle is not your run of the mill Hollywood liberal but he is not a right wing comic either. I am guessing he is a democrat but he clearly has some conservative thoughts and leanings too. Like most people, he is more nuanced than the hyper-polarized worlds of Foxnews and MSNBC.

So, it was not that his special was un-PC that bothered me. It was that the comedy.... especially on the Jackson stuff, was not speaking to what we are all thinking but instead was speaking to some dark stuff no one but Chappelle is thinking. Especially the Michael Jackson stuff. I think that if this was bit was not included in "Sticks and Stones," my review would be much more positive.

Spoiler Alert. But it is in there and it is dark and it is mean. Chappelle starts talking about how this is a terrible time to be a celebrity. Every thing they ever did and some things they did not do are now being used against celebrities. He talked about Kevin Hart's anti-LGBT tweets and Louie CK's creepy behavior in front of women. And if those were the sorts of examples he used, I might agree with him. I have written in the past how the #MeToo movement can be an unforgiving witch hunt without any sort of due process. But he uses an example that I didn't just disagree with, I found to be dark. He starts talking about Michael Jackson. He notes (funnily) that Jackson got accused twice after he was dead. But then he goes on to say he does not believe the accusers which, while I disagree, I guess is fine (although for his sake I hope he is sure because that is some mean stuff to say to abuse victims). But then he goes on and says the most disturbing bit of the joke. He says that even if they were really abused they should not complain because he was the King of Pop and most abuse victims are just abused by regular people. Huh. The crowd laughed. There was something funny about the way he said it. But like laughing at the handicap girl in school, any sort of enjoyment I took from the bit quickly spoiled into a dark feeling. The realization that someone is mocking someone that does not deserve to be mocked. Someone is punching down..... way down... for a laugh.

There were a few other moments like this during his show (e.g. the abortion bit) but none of those had quite the same level of darkness.

Now.... I should add that there were many moments of insightful and thoughtful critiques of our society. Generally, I agree with about 70% of what he said. When this special gets edited and put in 3 minute clips on Youtube, some of these bits might be gold. But my review is not of the individual bits. It is of the whole thing. And the 30% that is so dark and wrong makes me unable to give a glowing review.

I feel weird typing this. I am someone that seriously hates woke comedy. I seriously hate it when people stay safe with their jokes. I have always liked Chappelle and liked him specifically because of his lack of safety. Norm MacDonald, Bill Burr, and others have my affection for similar reasons. Guys that see what society pressure wants them to say but go ahead and speak truth anyway. The problem with "Sticks and Stones" is not that it was speaking the truth we all know but don't say. The problem was that it was speaking a dark falsehood for a cheap laugh at someone else's expense.

And that is completely different.