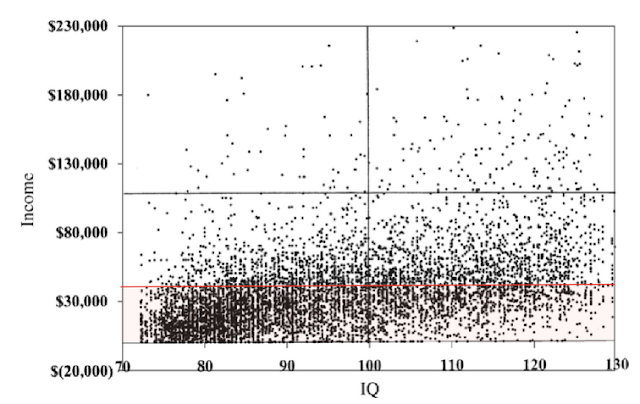 In fact, putting a straight line trend on this is silly. Remove the trend line and let your eyes look at the dots. What do you see? I see buck shot. Maybe a slight trend but not something I would do any sort of engineering based on.

My undergraduate is engineering. Before I decided to move in other directions educationally and career wise (moving to business then philosophy) I worked in several transportation markets including Aerospace, Auto, and Heavy Duty. We worked on components that meant life and death. Big impact on people if we got something wrong. A car or plane that fails endangers the safety of everyone on board. We did a lot evaluation of components to determine which component level tests were meaningful. We had to get them right for safety sake. I spent a ton of time in labs and looked at endless data. We would never.... never.... have taken a chart like the above and drawn any sort of significant conclusion from it. We would look for much higher R^2 values. Much less noise. Data like that would cause more questions than anything. Imagine the same chart with miles driven on the x axis and component wear on the y axis. If I showed that data, the first question every engineer would ask is, why does this test show that components with extremely low miles are wearing so much? Why does this test show that components with high miles are not wearing at all? What is wrong with this test? What is the gauge R&R (gauge repeatability and reproducibility)? In other words, how much can we trust the tools we used to collect the data?

But social scientists are not engineers. Few have worked in labs. Most pour over data collected from databases and look for correlations. They get paid to find correlations. Which is a horrible way to do anything. Look at any large amount of data with many variables and you will always find correlations. 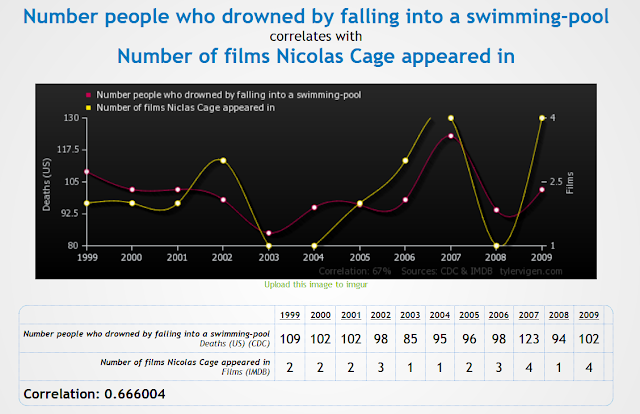 Where engineers have to poke holes in meaningless correlations (for safety sake), social scientists have to find correlations. Their funding depends on it. But this does not mean there is less risk in the work of social scientists.  If an engineer creates a bad test, it might lead to a driver getting in an accident, but when a social scientist draws their wrong conclusions, the effects are more hidden but no less harmful.

IQ is perhaps the most harmful of them all. When you tell someone they have a low IQ, you are putting them in a box. You are a 87. You are not very smart. Your have slow cognitive abilities. Your likelihood of success  is low. The chances of you making a high income is lower.  IQ is viewed, by most people, as a trait like height or eye color. Richard Lynn, in IQ and the Wealth of Nations, says, "IQ is highly heritable." In other words, you are born with it. Sucks to be you 87.

This is scientific malpractice. Personally, I would rather get in a car accident than have some scientist convince me that I was an idiot. But this is what IQ proponents do every day. And they do so with data that every automotive engineer would reject every single day of the week. It is a crime. Mean. Cruel. And damaging.

Get your head out of the data, and ask a few critical questions and you will see that IQ cannot be meaningful. I have previously written about how complicated intelligence is.  There I wrote:

"What does it even mean to be intelligent?...Think about three people you know that are smart. What makes them smart?
Ability to do math?
Good memory?
Eloquence?
Erudition?
Wit?
Creativity?
I am guessing that the smart people in your life fit some of these well and others not at all. I think I am good at math, have an average memory, am not particularly eloquent , am fairly erudite (thanks to reading a lot), am not very witty, and sometimes completely lack creativity. I know other people I consider smart that are weak in many of the places I am strong and strong in many of the places I feel weak.I also know people who I am sure have low IQs (guys that I worked with on construction crews when I was in college and who I spent time working on cars with back in high school) who know a ton more than me about given topics and are smarter in many contexts than I am."
Intelligence is this complicated thing and yet we want to simplify it down to a single number. You are an 87.  Now, what if that 87 speaks 10 languages and is a brain surgeon? It should not matter. But I am guessing that most brain surgeons would be bothered by an IQ score of 87 anyway. Almost no amount of accomplishment could shake our cultural acceptance of IQ as THE way to measure intelligence. But can we all not see how effing ridiculous this is?

Another thing that we can see when we get our head out of the data and look at real life is how we can test the test. Go talk to your mechanic. He probably is not a college grad. Statistically he is probably lower IQ. But his knowledge of cars is mind-blowing. He can name all the parts. Tell you how to fix various things. He can diagnose as well as any doctor. In short, in his domain, he is smart. He is a smart man who scores low on IQ tests. Similarly, go watch some Youtube clips of George W. Bush. Read his dumb decisions on pretty much every level of government (from staff choices, to legislative efforts, to poorly thought out wars, to gaffs in his speeches). I am sure he is a nice guy if you knew him but the man was clearly dumb. But.... by several accounts he did well on standardized tests and probably has a high IQ. He is a dumb man who scores high on IQ tests.

These are examples of testing the test. They are the sort of results that would make every engineer demand that the test be rethought, rejected, or supplemented.

And thus we should. IQ is ridiculous. I propose that we reject the concept all together. We look at skills, knowledge, and abilities relevant to the fields that we are looking at for schooling and employment rather than some standardized IQ test (of which, I would argue SAT is one).