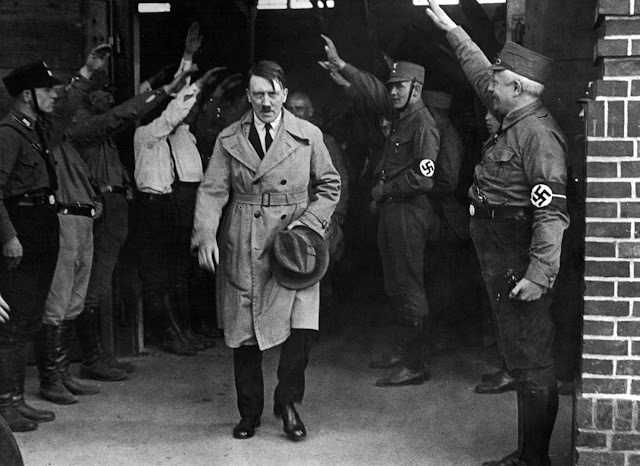 One thing I was surprised to learn is that many people are under the mistaken idea that Hitler was a Christian. It is not uncommon for me to be in a discussion about history and religion and to hear "Hitler was a devout Christian".

The first time I heard it, I just laughed it off. But since then I have been confronted with the same statement over and over. My skeptic friends back up their claim by quoting several public statements that Hitler made espousing Christianity (there are a few statements in Mein Kampf and in his early speeches in which Hitler gives praise to God). These statements are provided as proof that Hitler was a Christian (perhaps even a devout one).

Let’s review the evidence. Let’s start with Hitler’s inner circle. Hitler’s close confidant and high ranking official in the Nazi party Goebbels was blunt when he gave an overview of Hitler’s views on Christianity stating that Hitler was “entirely anti-Christian."  Hitler’s architect and well connected man among the highest ranks of the Nazi party, Albert Speer, stated that the Führer abhorred the faith for what he deemed its "meekness and flabbiness."So two the people who were in the best position to get Hitler’s views on Christianity agree that he did not like Christianity.

This makes sense given that the Nazi party issued anti-Christian statements through their propaganda office. Just consider this statement from Nazi propagandist Friedrich Rehm at Christmas time 1937,“We cannot accept that a German Christmas tree has anything to do with a crib in a manger in Bethlehem. It is inconceivable for us that Christmas and all its deep soulful content is the product of an oriental religion."

At this point, those stating that Hitler was a Christian either admit their mistake or unfortunately persist. Those who persist do so by saying 'what about his own words from Mein Kampf and his early speeches that appear to celebrate and promote Christianity?' I have two answers to this. First, when it comes to politicians, which would you trust more – their self promoting public statements or their private conversations with friends and their actions in office? Second, the handful of statements he made early proclaiming faith need to be placed next to the almost endless number of statements mocking, deriding and denouncing Christianity.

Here is a small sampling of Hitler's direct quotes on Christianity:

"We do not want any other god than Germany itself. It is essential to have fanatical faith and hope and love in and for Germany."


“…the only way of getting rid of Christianity is to allow it to die little by little."“It’s Christianity that’s the liar. It’s in perpetual conflict with itself."“In the long run, National Socialism and religion will no longer be able to exist together”


“Kerrl, with the noblest of intentions, wanted to attempt a synthesis between National Socialism and Christianity. I don’t believe the thing’s possible, and I see the obstacle in Christianity itself.”


“As far as we are concerned, we’ve succeeded in chasing the Jews from our midst and excluding Christianity from our political life."


“There is something very unhealthy about Christianity.”


“The reason why the ancient world was so pure, light and serene was that it knew nothing of the two great scourges: the pox and Christianity. Christianity is a prototype of Bolshevism: the mobilization by the Jew of the masses of slaves with the object of undermining society. Thus one understands that the healthy elements of the Roman world were proof against this doctrine.”


“When all is said, we have no reason to wish that the Italians and Spaniards should free themselves from the drug of Christianity. Let’s be the only people who are immunized against the disease.”


“Our epoch will certainly see the end of the disease of Christianity. It will last another hundred years, two hundred years perhaps. My regret will have been that I couldn’t, like whoever the prophet was, behold the promised land from afar. We are entering into a conception of the world that will be a sunny era, an era of tolerance.”


And these are just a few, there are many other quotes that could be brought forward showing in Hitler’s own words how much he hated Christianity.
What About Nazi's Using Christian Phrases and Symbols?
Inevitably, people who think the Nazi's were Christian point to various Christian symbols, phrases, and slogans in the Nazi army. Are these evidence that the Nazi's were at least Christian-friendly?For example, the Nazi army had a slogan (and various badges and insignia) that used the slogan: "Gott Mit Uns," translated, "God with us." If Hitler and the Nazi's were so anti-Christian why would they do this? The answer is that they did not. The Christian symbols of the army were used long before the Nazi's took over and the Nazi's worked to slowly remove them. For example, the phrase Gott Mit Uns had been in place as a slogan for the military for generations and the Nazi's removed it from officer uniforms. They left it in place for the foot soldiers but this appears to be a concession (the army loved the phrase).
In conclusion, Hitler hated Christianity. Anyone that says otherwise is either ignorant of history or spreading intentional misinformation.

Further reading: Here is a helpful article from the Washington Post