The Global Church is Growing 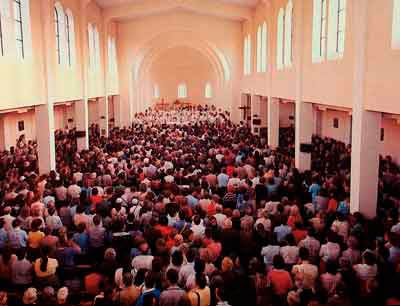 I posted in the past on how, despite the common misconception, the church really is doing fine in the USA.  Church attendance rates have been steady for 100 years. But the truth is that the church is doing more than holding steady. Since the foundation of the church in the wake of the death and resurrection of a itinerant preacher named Jesus, those calling themselves Christians have grown from a handful of disciples to a third of all human beings on earth.

Exact numbers are obviously hard to generate but I took these numbers from two sources. For the numbers of Christians in the world, I used a Missions study from Gordon Conwell Seminary and for the total population of the world, I used the HYDE study (for populations prior to 1950 and then I used the UN reports). For reference, I also looked at other estimates from other organizations and while there are minor differences in estimates this general trend and big picture is consistent.

Here is the chart I created. 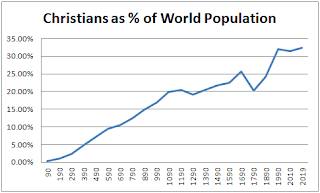 The blue line represents Christianity as a percentage of the world's population. With some starts and stops, you can see that Christianity has been moving up throughout our 2000 year history.

But, you might say, sure, but it has had its day. Now people know better and it is probably shrinking, right? What about over the past 50 years? Well, actually it has been very steady globally since 1970 (if anything ticking up slightly). The percentage of Christians in the world in 1970 were 31.2%. In 2000, that number was estimated at 32.3% and in 2013 that number was estimated to be 32.6%.

Missionaries who toiled and died working in Africa and Asia during the late 19th and early 20th century planted seeds that came into full harvest in the second half of the 20th century. Some of the fastest growing areas of the church were in what is known as the global south.  Christianity in Sub Saharan Africa went from single digits to a majority religion. In countries like Korea, Singapore, and China the church has seen dramatic growth as well.

In short, the church continues to grow. Despite challenges. Despite everyone being confident it is shrinking. It is growing. What happens in the next century is of course unknown. Pew posted a comprehensive study a few years ago that suggested that Christianity would remain about a third of the world's population through 2050 and that Islam would also grow from 23% now to 29% then. But if Christianity's past is any reflection of its future, we are more likely to underestimate the growth than to over estimate it.

If the Apostles could see history unfold, they would nod and remember the last words that Jesus spoke to them before being called up to heaven, "You will receive power when the Holy Spirit comes on you; and you will be my witnesses in Jerusalem, and in all Judea and Samaria, and to the ends of the earth.”