Book Recommendation - The Rage Against God by Peter Hitchens 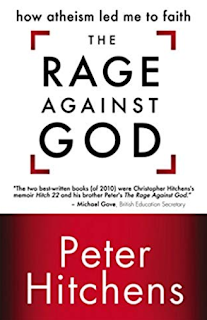 I have long been familiar with famed (late) atheist Christopher Hitchens. He was a likable atheist who seemed to at least be willing to engage people he disagreed with. I respected him enough to read his book and watch his debates and not dismiss him (Sam Harris on the other hand is an unintelligent idiot who can just be dismissed).  What I did not know when I first discovered Hitchens was that his brother, Peter, was a very conservative Christian and also a thoughtful and compelling writer.

That changed when someone suggested I read the book, The Rage Against God: How Atheism Led Me To Faith by Peter Hitchens.  I bought the kindle version and am so glad I did. The book is a work of art. It is less an argument with his brother or atheism and more a personal memoir. And a memoir that is compelling, challenging, and wonderfully told.

Hitchens tells the story of his growing up in post World War II England (the book is worth the read just for this excellent portrayal of an era), his time in the Soviet Union, and most importantly his journey from atheism to Christian faith. To give you a taste of the compelling story he tells, read his account of when he first feared hell.

"What I can recall, very sharply indeed, is a visit to the Hotel-Dieu in Beaune, a town my girlfriend and I had gone to mainly in search of the fine food and wines of Burgundy. But we were educated travelers and strayed, guidebook in hand, into the ancient hospital. And there, worth the journey according to the Green Michelin guide, was Rogier van der Weyden’s fifteenth-century polyptych The Last Judgment.


I scoffed. Another religious painting! Couldn’t these people think of anything else to depict? Still scoffing, I peered at the naked figures fleeing toward the pit of hell, out of my usual faintly morbid interest in the alleged terrors of damnation. But this time I gaped, my mouth actually hanging open. These people did not appear remote or from the ancient past; they were my own generation. Because they were naked, they were not imprisoned in their own age by time-bound fashions. On the contrary, their hair and, in an odd way, the set of their faces were entirely in the style of my own time. They were me and the people I knew. One of them—and I have always wondered how the painter thought of it—is actually vomiting with shock and fear at the sound of the Last Trump.


I did not have a “religious experience.” Nothing mystical or inexplicable took place—no trance, no swoon, no vision, no voices, no blaze of light. But I had a sudden, strong sense of religion being a thing of the present day, not imprisoned under thick layers of time. A large catalogue of misdeeds, ranging from the embarrassing to the appalling, replayed themselves rapidly in my head. I had absolutely no doubt that I was among the damned, if there were any damned. And what if there were? How did I know there were not? I did not know. I could not know. Van der Weyden was still earning his fee, nearly 500 years after his death. I had simply no idea that an adult could be frightened, in broad daylight and after a good lunch, by such things. I have always enjoyed scaring myself mildly with the ghost stories of M. R. James, mainly because of the cozy, safe feeling that follows a good fictional fright. You turn the page and close the book, and the horror is safely contained. This epiphany was not like that at all." Hitchens, Peter. The Rage Against God: How Atheism Led Me to Faith (pp. 102-103).

In my experience, most Christians will admit that fear of hell was at least part of the reason for their conversion. I know it was a major factor in my own. But Hitchens' exposition of this experience is brilliant and haunting. His unembarrassed admission - he was among the damned - is refreshing and true. And it reflects the book as a whole. This sort of blunt honest prose is found on every page of The Rage Against God.

If there is an argument to The Rage Against God, it is this: the world needs God. Cultures devoid of the Christian faith such as the Soviet Union become hard, dark, corrupt and cruel.

I agree with Hitchens but even if you do not you will enjoy this book. Do yourself a favor and give it a read. The history is interesting. The arguments are compelling. And the prose is excellent. Buy it and enjoy.