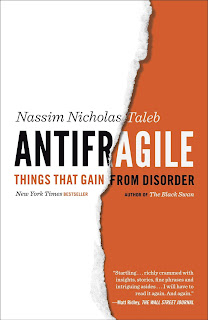 I think like most people, my first impression of Taleb was, "who is this arrogant guy and why does he think he has everything figured out?" But as I read, like most people who give him a chance, I started to think, "this guy is fantastic and everything he writes is fascinating."  Antifragile was the first book by Taleb I read. A friend of mine actually had to give me a copy to read because I was so not interested. But when I finally read it, I went on to read the rest of his fantastic body of work including, "Fooled by Randomness," "Black Swan," and "Skin in the Game."

What makes me love Taleb so much? CS Lewis once wrote that everyone should read old authors not because things were any less confused in the old days than now but because:

"Every age has its own outlook. It is specially good at seeing certain truths and specially liable to make certain mistakes. We all, therefore, need the books that will correct the characteristic mistakes of our own period. And that means the old books."

And this quote is why I love Taleb. Taleb is very much alive still (and Tweeting) but he writes like a man outside of our time. Someone who sees and understands the outlook, philosophy, and reasoning of the ancients and then looks at modern society with those eyes. It is as though Seneca had been resurrected and commenting on what the world is doing today.

Antifragile is the fourth book in his Incerto series (preceded by 'Fooled by Randomness,' 'Black Swan,' and 'The Bed of Procrustes') but it is a great place to start reading Taleb. Antifragile takes the central themes of the previous books in the series and answers the question, 'how now should we live?' If (terribly oversimplifying) Fooled by Randomness is about the fact that life is much more random than we think and if Black Swan is about the fact that life is much less predictable than we think, Antifragile tells us how to live in a random and unpredictable world.

Being an antifragile person means that you have built your life to deal with the randomness, uncertainty, and unpredictability of life. Build a life that gains from disorder rather than falling apart. Taleb talks about every area of life. Technology, medicine, diet, architecture, religion, philosophy, finance, and war. What does it mean to be antifragile in each of these areas?

He expounds and explains serveral helpful concepts such as the lindy principle (the idea that things that have been around the longest will be around the longest), the ludic fallacy (the error of thinking of the real world in terms of games), and via negativa (the idea that usually the most helpful knowledge is what to stop doing rather than what to do).

Throughout the book are brilliant and counter-intuitive ideas such as,

“Few understand that procrastination is our natural defense, letting things take care of themselves and exercise their antifragility; it results from some ecological or naturalistic wisdom, and is not always bad -- at an existential level, it is my body rebelling against its entrapment. It is my soul fighting the Procrustean bed of modernity.”

And throughout the book everything he says is interesting whether you agree or not.

Check it out. Then read everything else by Taleb.