Pride Flag as a Symbol of Oppression? 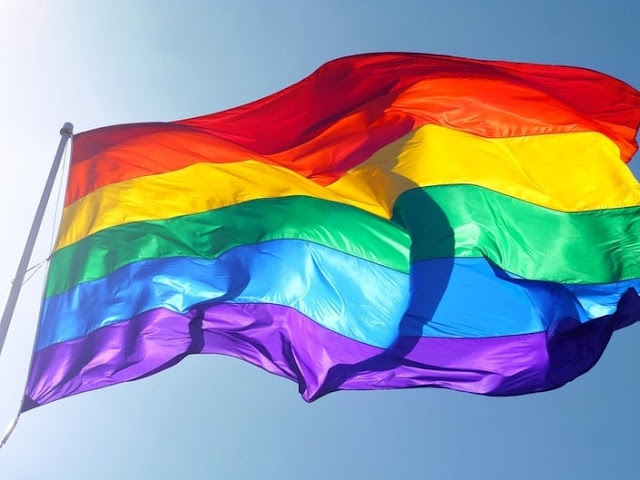 When City Church San Francisco was planted it was a fairly conservative Presbyterian church. It held the historic Christian view of sexual ethics. But with time, its pastor, Fred Harrell, changed his views and decided that homosexuality was not a sin. Then, fairly abruptly, the church announced to its congregation that it had changed its views and now would be an 'open and accepting' church. When World Magazine did a story on these things, soon after the events, they interviewed members that were unhappy with the change. But something interesting happened with these interviews. These San Francisco residents were unwilling to include their names. Despite the fact that many people from the church left, many more were unhappy with the changes, World Magazine was unable to find people to go on the record with their concerns. They said that some, after giving their thoughts, actually called them back later and begged them not to include their names in the story. It was reminiscent of the reluctance of people under Soviet oppresion to say anything negative about the government.

And the comparison is not without some parallels. For simply holding the religious beliefs that they had always held, these Christians feared they would lose their jobs and be ostracized by their neighbors. They feared hatred and rejection by friends and family. They feared being doxxed. They feared violence.

Were they being silly? Were they being paranoid? No. There are many examples of all these things happening to people simply for affirming the historic Christian sexual ethic.  For example, the Mozilla CEO was fired for opposing gay marriage. Bakers who oppose gay marriage are being subjected to protracted lawsuits. And death threats were made to people who supported Prop 8 (a bill opposing gay marriage in California).  Churches that opposed gay marriage have been vandalized.  I can tell you from personal experience on social media that many people view people who hold the traditional Christian sexual ethic to be deserving of any harm or damage that comes their way. Christians who hold the historic Christian sexual ethic are haters and should get what is coming to them.

Christians therefore were right to fear retribution for publicly stating their views. Every Christian knows that we have an option to stay quiet or face consequences.

When a religion cannot freely teach the ethics of its holy book, that is called oppression.

I know that many will say, "serves you right. You have been the oppressors in the past and now you need to get in line or suffer the consequences." And if that is what you say, you are part of the problem. Every oppressor justifies their abuse by saying that the people they are abusing deserve it. It's still oppression.

And it is not like Christians can just change. I became a Christian when I was 20 years old. At the time, I was in a bad spot in my life. Substance abuse and a sense of worthlessness in life, Christianity was both intellectually fulfilling and existentially satisfying. Since then, it has been a central part of my life. It has been a central part of my family. Our weeks are punctuated by prayer and the Christian sabbath. Our year is highlighted by Christian holidays. It is something I would die rather than set aside or betray. So, I am in a situation where a group of people are saying, give up something you would rather die than give up or suffer almost any punishment.

So... along comes Pride month. Every corporation is making posts to show they are onboard. Every artist. The flag is flying on businesses around town. Every politician is posting their pride statements. Every celebrity is stating their support.

And while they may think they are just being nice, I think for many it strikes a more ominous tone. It says, 'we think you are a hater.' It says, 'hey, for this very complicated ethical and social question, we have decided you are wrong and that the other side should be celebrated.'

When I see a company flying the pride flag, it does not inspire celebration. It inspires a sense of oppression.