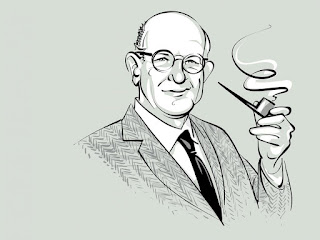 I have been reading a ton of PG Wodehouse recently. For those of you that have not read him, he is an English humor writer who wrote during the middle of the 20th century. Considered by many to be the best in this genre. I had read a few of his books (e.g. 'Code of the Woosters,' 'Summer Lightning,' 'Leave it to Psmith') but recently went on a little Wodhouse bender where I read six or seven of his novels in a row (bringing the total I read up to something like 15). He wrote more than seventy novels during his career starting in 1902 and continued writing up until his death in 1975.  As I have read his various works (picked almost at random), I noticed a pattern. His early novels are average at best. There is something to them - a certain charm - but they are forgettable and do not seem like Wodehouse books. They do not have anything like the brilliance that he developed with time. For example, the "White Feather," (published 1907) is cumbersome at times to read, more serious than funny, and has straightforward and uninteresting prose. "Love Among the Chickens" (1906) and "Something Fresh," are interesting because they take place in the same universe as his brilliant later works at Blandings Castle but they are only mildly funny, overly explain-y, and lack the playful prose of his later works. But as his career progressed, he hit a sweet spot where he had developed his unique style, his prose became inherently funny and interesting, and his characters became true comedic masterpieces.

In short, what I see with Wodehouse is an average writer that became one of the all time greats over the course of his career. GK Chesterton said that "If a thing is worth doing, it is worth doing badly." If you want to achieve greatness, do not assume that the greatness is found in your genes. Often greatness is found in writing average novel after average novel for years and years before finally achieving greatness.